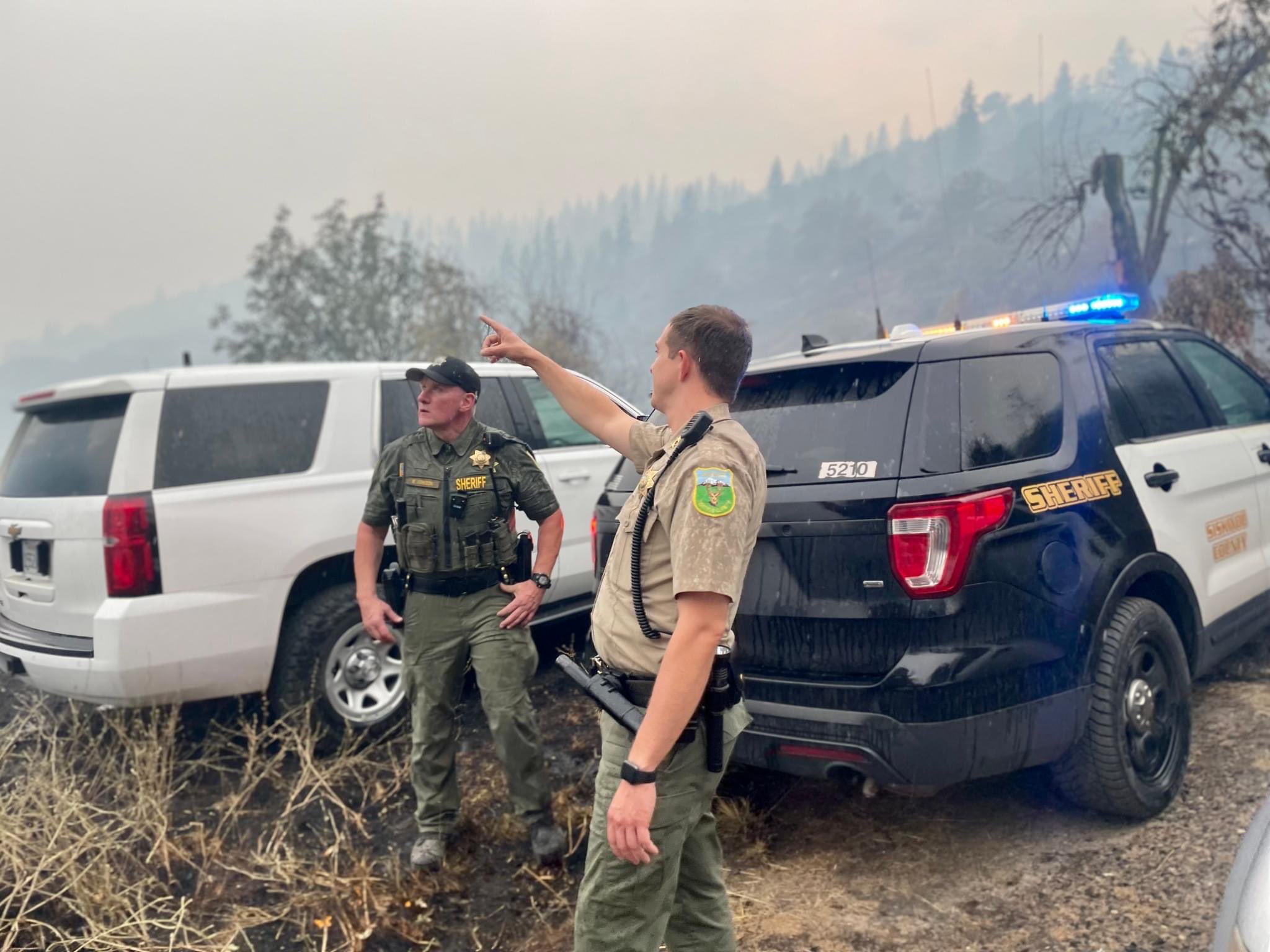 YREKA, Calif. (AP) — At least two people have died from a raging California blaze that was among several menacing thousands of homes Monday in the Western U.S.

Two bodies were found inside a charred vehicle Sunday in the driveway of a home near the remote community of Klamath River, the Siskiyou County Sheriff’s Office said in a statement. The names of the victims and other details weren’t immediately released.

The McKinney Fire in Northern California near the state line with Oregon exploded in size to nearly 87 square miles after erupting Friday in the Klamath National Forest, firefighting officials said. It is California’s largest wildfire of the year so far and officials have not yet determined the cause.

Gusty winds from a thunderstorm powered the blaze of a few hundred acres into a massive conflagration while lightning caused a couple of smaller blazes nearby, including one near the community of Seiad Valley, fire officials said.

On Monday, heavy rain helped dampen the fire but it still threatened structures after torching more than 100, ranging from homes to greenhouses, fire and sheriff’s officials said.

About 2,500 people remained under evacuation orders.

“If you get an order, that means go. This fire behavior, as you’ll hear, is incredible. Don’t try to fight it. Don’t try to stick around,” Siskiyou County Office of Emergency Services Director Bryan Schenone said at a community meeting Monday evening.

Stormy and cloudy weather helped fire crews attack the blaze, and bulldozers had managed to ring the town of Yreka, fire officials said.

As of Monday, the blaze was about 4 miles from the town of around 7,500 people.

Valerie Linfoot’s son, a fire dispatcher, called to tell her their family home of three decades in Klamath River had burned. Linfoot said her husband worked as a U.S. Forest Service firefighter for years and the family did everything they could to prepare their house for a wildfire — including installing a metal roof and trimming trees and tall grasses around the property.

“It was as safe as we could make it, and it was just so dry and so hot and the fire was going so fast,” Linfoot told the Bay Area News Group. She said her neighbors have also lost homes.

“It’s a beautiful place. And from what I’ve seen, it’s just decimated. It’s absolutely destroyed,” she told the news group.

In northwestern Montana, winds picked up Monday afternoon on a fire burning in forested land west of Flathead Lake, forcing fire managers to ground all aircraft and leading the Lake County Sheriff’s Office to start evacuating residents on the northeastern corner of the fire.

The fire was putting up a lot of smoke, creating visibility problems for aircraft, said Sara Rouse, a spokesperson for the fire management team.

The fire, which started Friday afternoon near the town of Elmo on the Flathead Indian Reservation, measured 20 square miles, fire officials said.

The Moose Fire in Idaho has burned more than 85 square miles in the Salmon-Challis National Forest while threatening homes, mining operations and fisheries near the town of Salmon. It was 23% contained Monday.

And a wildfire raging in northwestern Nebraska led to evacuations and destroyed or damaged several homes near the small city of Gering. The Carter Canyon Fire began Saturday as two separate fires that merged. It was about 30% contained by early Monday.

Scientists have said climate change has made the West warmer and drier over the last three decades and will continue to make weather more extreme and wildfires more frequent and destructive.

The U.S. Forest service shut down a 110-mile section of the famed Pacific Crest Trail in Northern California and southern Oregon. Sixty hikers in that area were helped to evacuate on Saturday, according to the Jackson County Sheriff’s Office in Oregon, which aided in the effort.