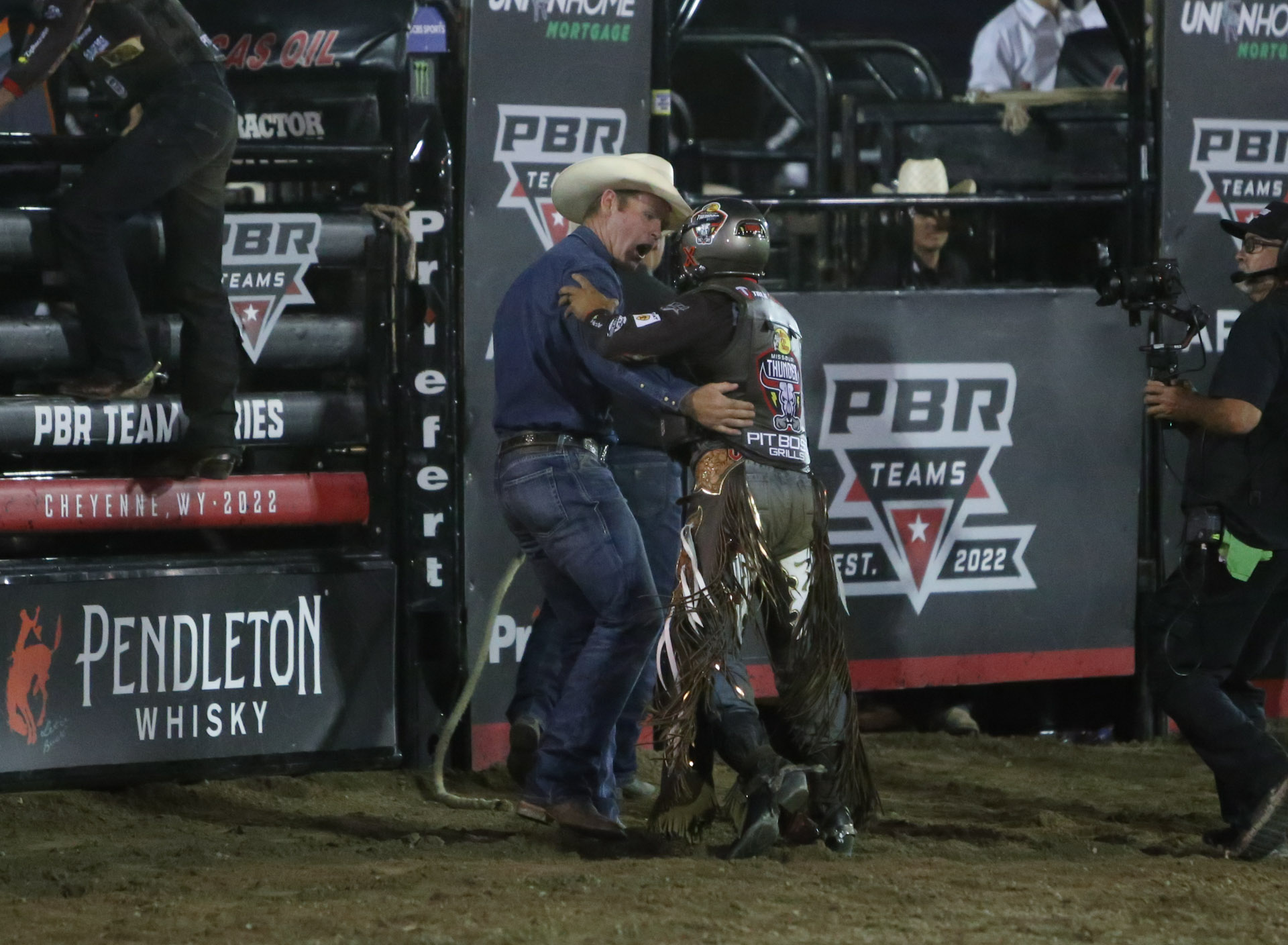 CHEYENNE, Wyo. — No one can ever take away Tuesday night from the Missouri Thunder.

And within the walls of Frontier Park Arena, the Thunder’s riders were able to celebrate a monumental occasion in style inside a building already steeped in so much history.

The Professional Bull Riders held the second show of its two-night competition Tuesday in Cheyenne for the event as part of the first-ever regular season for its new Team Series, a concept that turns the normally individualized world of bull riding into a squad-based league.

It was truly a new frontier for each of the eight teams involved, but only one, Missouri, managed to get the job done and win both of its five-on-five games against other squads across the two nights to be crowned the first event champions in PBR Team Series history.

Thunder co-coach Luke Snyder, who had 34 top-five finishes in his highly successful PBR career from 2000 to 2013, earned plenty of accomplishments as a world-class cowboy back in his riding days. But winning his inaugural event as a coach? That ranks right up there with the best of his accolades, he said.

“All these guys ride so good, it was more about the character of these guys, too,” Snyder said of his team selection process with fellow co-coach Ross Coleman. “We’ve just built such a great bond and the guys really came together. I think hands down we’ve got the strongest team, but all of these teams are so strong and we’ve beat some very, very tough competition here.”

After Missouri rider Adriano Salgado’s qualified ride was enough to see his team get past the Texas Rattlers on Monday, the co-coaches opted to make a lineup switch for the second matchup Tuesday against the Nashville Stampede, who themselves were coming off a Monday win against the Carolina Cowboys.

The Thunder’s Jesse Petri was plugged in as his team’s opening rider off of the bench against the Stampede, to which the 24-year-old Texan responded by notching an 85.75-point ride on Cold Chill to help his team start off strongly. An 88.5-point ride by Andrew Alvidrez on Chanler’s Dream later in the game then sealed the deal after Nashville only managed one qualified ride of its own.

Team Series rules dictate that teams win games based on having a higher aggregate score than their opponent, while teams win events by recording the most game wins overall across the rest of the field. Therefore, after four head-to-head matchups ended with no squad other than Missouri sitting at 2–0, it meant the Thunder earned the right to be called champs in Cheyenne.

“The feeling is, you can’t explain it in words,” Alvidrez said. “Never I would’ve thought I’d be with a team that’s like this. It’s a brotherhood, and [I’m] being around guys that hold myself accountable. … Just being able to pull the win off here, it just shows what accountability and a brotherhood can do.

“Having coaches like Ross Coleman and Luke Snyder, yeah, they’re onto us about the bull riding, but more of it is just being a cowboy [and] being a man. … That’s what I think really pulls us together because we’re all trying to hold each other accountable. And that’s what being a cowboy is about.”

Though 2022 is the Team Series’s first season, plans for some form of a team-based format in the sport have been long in the works. PBR CEO Sean Gleason said that the original framework for what eventually became the Team Series was designed in 2007, though it didn’t get off the ground at the time. Now, he says there’s a “waiting list” for cities interested in being host to expansion teams if and when the time comes.

“There’s a lot of smaller sports that have started up and are trying to make their way in the world, and then there’s the big six or seven — football, basketball, baseball, UFC — and I want to be spoken about in those circles,” Gleason said when asked where he sees the Team Series in 5–10 years. “I think Teams is going to put us on the map and allow us to be spoken about in those circles.”

If the opening two nights of the series’s history were any indication, it’s safe to say that things are off to a good start so far. The western stand of Frontier Park Arena was filled to near-capacity during both shows, and the league capped off the second night with a bonus round that acted as a bit of a showcase of talent for each team’s most talented rider on some of the world’s rankest bulls.

But for the Thunder, they now have a target on their backs after emerging as the newfound favorite by default following their strong showing in Wyoming. There are still nine grueling regular-season weeks and a season finale in Las Vegas left to go, but no matter what happens the rest of the way, Missouri will always have one thing it can be proud of.

It was the first team to win something in this new era of the PBR.

“I think that we definitely established ourselves as a force to be reckoned with,” Snyder said. “It’s all about motivation in this game and to jump out there right off the bat and have a win like this is just absolutely outstanding for confidence. We’re just going to be riding this high for the rest of the night and the next week.”