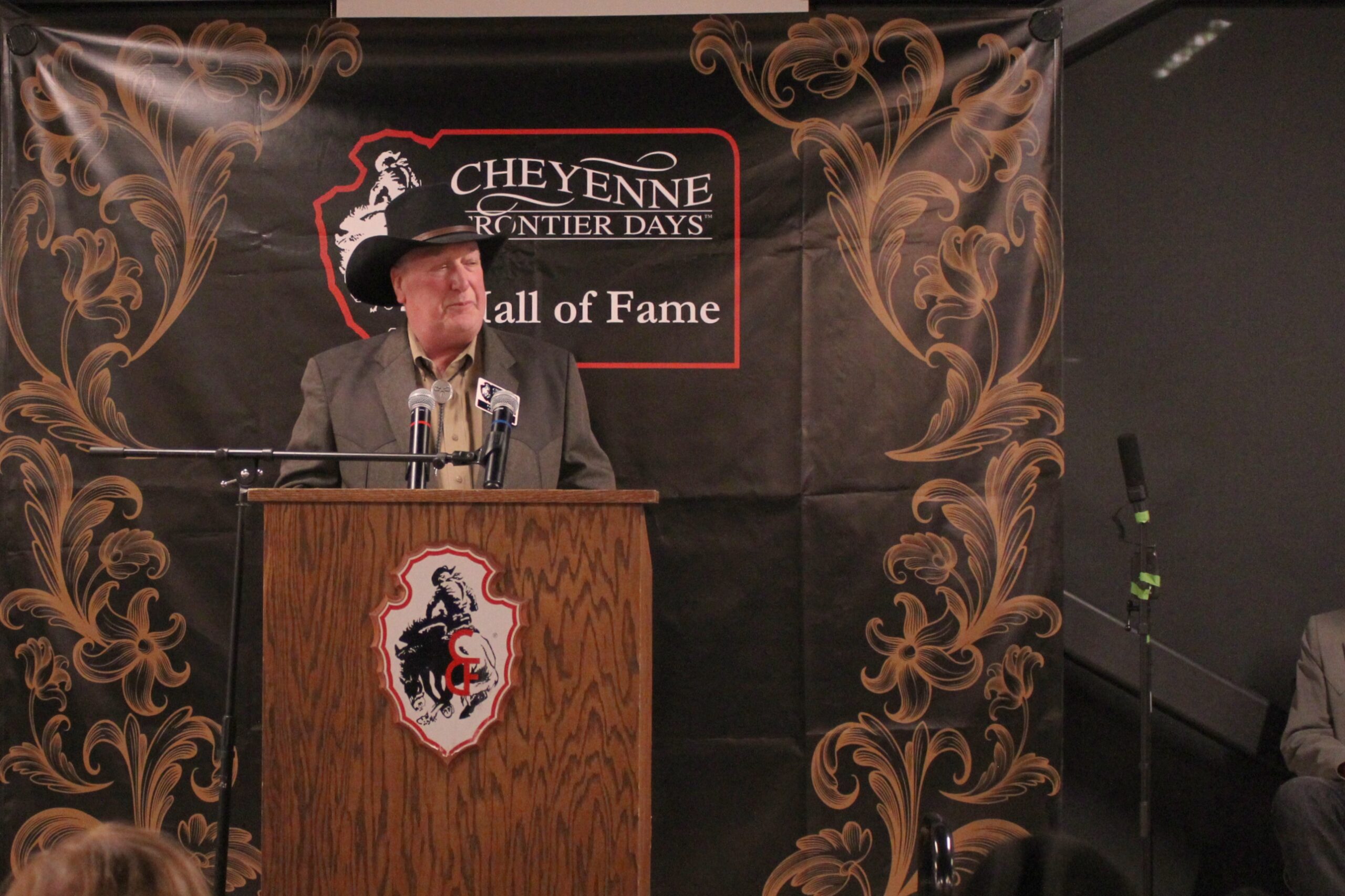 Father Joe Geders stands at the lectern during his speech commemorating his induction into the Cheyenne Frontier Days Hall of Fame on Friday night at the CFD Event Center in Cheyenne. Geders, a longtime volunteer and offerer of prayer before each rodeo during the festival, was one of eight individuals and groups inducted into the Frontier Days Hall of Fame's Class of 2022 during an induction ceremony Friday. (Briar Napier/Cap City News)

CHEYENNE, Wyo. — It takes time, honor and much, much respect to be recognized as one of the greats of the “Daddy of ’em All.”

But for the eight individuals and groups that were recognized as members of the Cheyenne Frontier Days Hall of Fame’s Class of 2022 during an induction ceremony Friday night at the CFD Event Center, their contributions, time and effort toward putting on the world’s largest outdoor rodeo year after year were rightfully recognized.

Some inductees represented themselves or their groups at the lectern in front of a ticketed gathering. Others have been long gone and are just now being immortalized as a critical piece of Cheyenne’s yearly centerpiece event. Regardless, for all of those who received the honor Friday, nominated by the public and their peers, the award was well deserved.

“It was never my goal to achieve any kind of notoriety when I became involved with Frontier Days,” Dean “Doc” Schroeder, a Friday inductee who started his 48th year as a festival volunteer in July, said about the honor. “All I was interested in was the free beer and the opportunity to put on a cowboy hat.

“This is an honor within the organization. And so all of those who are volunteers and who have continued to volunteer and who know what it’s like to volunteer, they understand that this is really kind of the top of the mountain. So I’m very honored to be considered in that group of people.”

Schroeder was one of several living (and still contributing) honorees, saying that he plans to continue to volunteer for Frontier Days as long as he still can. Much of his work has involved stints with the Security Committee (now known as the Operations Committee), HEELs and various other roles throughout the nearly five decades the now-retired psychologist has been involved with the festival.

However, major figures and organizations from throughout the event’s past were acknowledged as well. There was the Establishing HEELs, who took over the work of paid contractors when Frontier Days suffered financial difficulties during the Great Depression, keeping the festival afloat when its future was in peril. There was Maj. William Lewis Pitcher, an officer at Fort D.A. Russell who brought in Army soldiers to entertain guests to the first Frontier Days in 1897, kickstarting the centuries-long partnership between the event and military.

But other icons of the event were recognized in Friday’s ceremony, too, like Cheyenne-born Rick Keslar — a longtime volunteer who played a large part in erecting the giant Frontier Days neon sign off of Interstate 25 — and Father Joe Geders, a clergyman who has made it a point to volunteer at nearly every Frontier Days (and offer prayer before each rodeo) since being first introduced to the festival while assisting at a Cheyenne church during the summer of 1985.

“Once this event gets into your blood, it’s hard to leave,” Geders said during his induction speech. “I think that the continuance of Cheyenne Frontier Days is such an important event, because it holds up the values that the West has taught this country. In every age of humankind, there is darkness, but also light. … Cheyenne Frontier Days lights more than a candle, and I am thankful for the honor bestowed upon me, most especially because it comes from people who I consider my dear friends.”

Contributors honored in the Hall of Fame have come from all walks of life, from late cowboy Lane Frost to legendary music artist George Strait to Steamboat, the model for the Bucking Horse and Rider logo plastered on Wyoming license plates and the state university’s athletic teams.

But for the eight honorees that were the figures of the evening, they are now enshrined right along with those legendary names and more for as long as Frontier Days keeps on kicking.

“I have 40-plus years of memories,” Schroeder said. “It’s interesting that you can go anywhere in the United States and find somebody that was at Frontier Days. … It kind of has a lifelong imprint on you. It’s sort of like being in the military, where you’re always a veteran and you will always relate somewhat differently to people who are also veterans. And it’s just been a real experience for me to do this.”