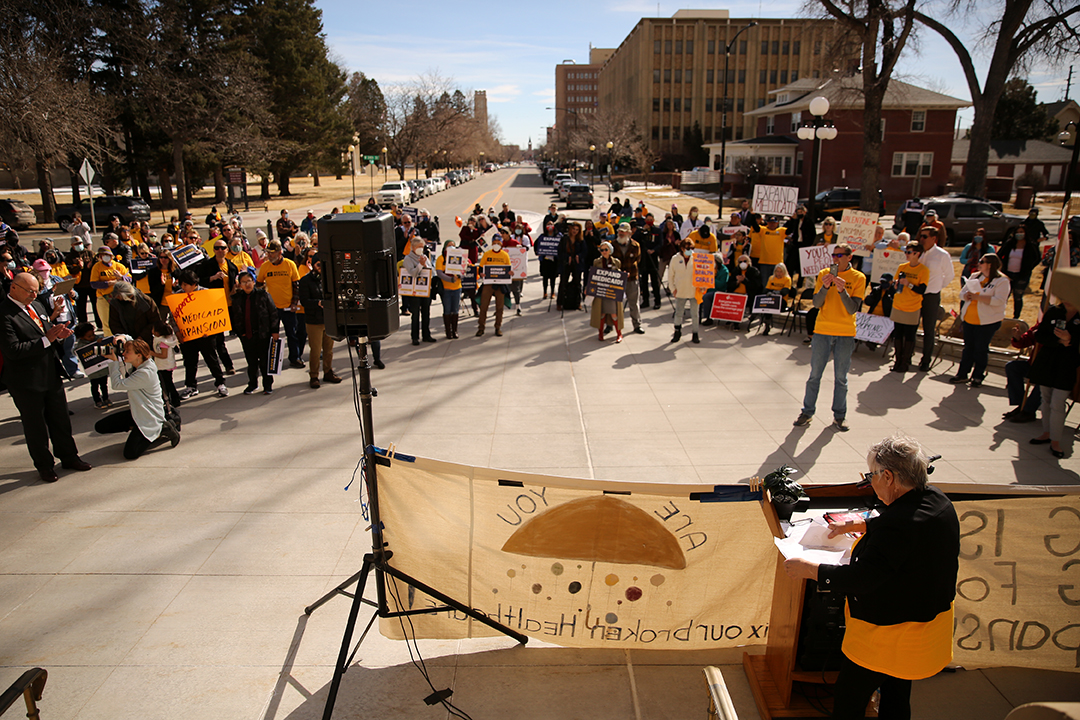 A crowd gathers at the Wyoming State Capitol building during a rally to expand Medicaid in Wyoming on Monday, Feb. 14. (Dan Cepeda, Oil City)

CHEYENNE, Wyo. — A rally supporting Medicaid expansion in Wyoming was held outside of the Wyoming State Capitol shortly after the joint session kicking off this year’s budget session on Monday.

The event, organized by the Healthy Wyoming Coalition, brought supporters and sympathetic politicians to the Capitol steps for speeches as well as testimony from Wyoming residents who’ve struggled to pay bills after medical emergencies.

The bill in question is in the House and needs to pass a two-thirds threshold, according to Better Wyoming executive director Nate Martin. Better Wyoming is among a dozen organizations involved with Healthy Wyoming.

“That means we need 40 of the 60 members of the house to vote ‘yes’ on introduction,” he said after the rally.

Martin says the policy is popular among Wyoming voters, but still faces stiff resistance among some lawmakers.

Last year after the bill failed during the session, WyoFile reported that “according to DOH estimates, House Bill 162 – Medical treatment opportunity act would have helped enroll anywhere between 13,000 and 38,000 people, lowered health insurance rates for private providers and helped to alleviate the more than $100 million in uncompensated care costs private hospitals eat on an annual basis.”

The bill is an important issue for Wyoming residents, according to Martin.

“It means that 24,000 or so people who currently don’t have any reasonable access to basic health care will gain that,” he said. “They’ll be able to go to the doctor when they’re sick, and they’re not able to now. It also means tens of millions of dollars in federal aid coming into our healthcare system, which is currently understaffed and under-resourced and, frankly, struggling.”

Martin says hospitals in Wyoming lose up to $100 million ever year providing care for people who can’t pay.

“Those costs are passed on to all of the rest of us in higher healthcare prices and insurance premiums; we all pay for it,” he said. “It’s not a mystery why Wyoming has the highest healthcare costs in the country.”

Wyoming is one of 12 states that has not expanded Medicaid care.