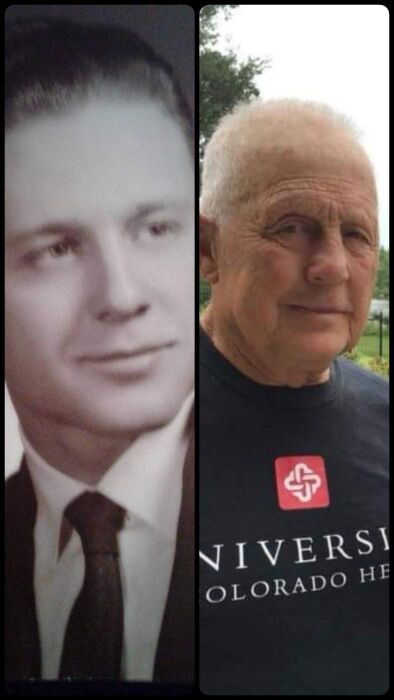 He grew up on a Kansas wheat, sorghum, and corn farm and starting at the age of 6 learned how to work hard and strive for excellence. In his early 20s, he worked as a wing sealer of the airplane fuel tanks for Boeing Aerospace. He married his beloved wife, Mildred Edwina Moore, on April 3, 1959. They moved to Loveland, CO in 1960 where he began his career in the construction industry. In 1970 he started his excavation company providing excavation for new houses in Larimer County for 30 years. After retiring he worked full-time in environmental services at the Medical Center of the Rockies for five years.

He and Edwina’s three children, Judy, Jeff, and Janet were born in Loveland, CO. He greatly enjoyed his four grandchildren Jenelle, Greg, Cynthia, and Lawrence.

Bob immensely enjoyed woodworking making furniture and building houses. In 1969, his family moved into a partially built home. While living there, he completed the construction of the beautiful three-bedroom, two-bath house. He built another house and sold it. In 1996 he built a beautiful ranchette on 40 acres in Wellington, CO. He and Edwina lived there until 2018 when they sold the ranchette and bought a house in Cheyenne, WY with their daughter, Jan.

Gardening and growing huge produce, especially onions, was a joyful seasonal experience for Bob. He loved harvesting his garden and cooking the produce, making hash with scrambled eggs for his family.

Bob would take his family four-wheeling in his 1950 Chevy pickup on the old logging roads in the Buckhorn Canyon. He would put it in granny gear. He and Edwina would enjoy the ride while the three children would wander the forest and then run and stand on the running boards and ride along too. Many summers were spent camping and four-wheeling in the Colorado Mountains.

Bob had a caring heart for family, friends, and complete strangers. He would help strangers stranded with vehicle problems, spending lengthy amounts of time while helping. He adopted his granddaughter’s partner as his granddaughter too. Though people’s behavior perplexed him, Bob taught his family to accept and appreciate people in all dimensions. He worked hard to not judge and nitpick. Bob was gregarious and no one was a stranger.

The family will have a private viewing and farewell. Bob requested that there be no funeral or memorial service. He wanted everyone who knew him, to remember him as he was the last time they talked. In lieu of flowers and cards, donate to your favorite charity.