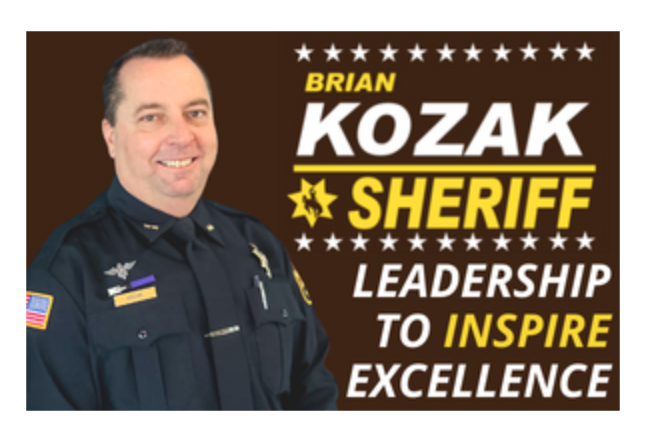 CHEYENNE, Wyo. — Cap City News has sent out a questionnaire to those running in the primary election in August. The following are the answers from Brian Kozak, who is running for Laramie County Sheriff. Answers are edited only for clarity and style.

I am Brian Kozak, and I am running for sheriff of Laramie County. My mother died of leukemia after I was born in Duluth, Minnesota, and my father suffered a brain injury at work, requiring lifelong hospitalization. My eight siblings and I were split up into foster homes. I was lucky to have been adopted by the Kozaks, who moved to Phoenix, Arizona, where I grew up.

I became an Eagle Scout and a police cadet explorer; I knew from this experience I wanted to be a cop. I spent 22 years with the Mesa, Arizona, police department. While working, I earned my master’s degree in teaching and bachelor’s degree in business. I was a motorcycle cop for 11 years, which is when I started my hobby of riding motorcycles. I retired from Mesa as a section commander, having the honor of leading our city jail, traffic division, gang unit, hiring unit, homeland security and patrol.

I then went to Avon, Colorado, a ski resort town next to Vail, to assist the city manager as the new police chief in changing the culture of the police department, which had little support from the community. Avon PD became nationally accredited and earned the National Human Rights Award.

I retired in January 2021 with 35 years of service and with a desire to run for sheriff.

While serving the City of Cheyenne, I realized the Laramie County Sheriff’s Office had tremendous untapped potential, which we can cultivate with the following goals:

Reconnect with residents and businesses to fight crime by implementing community outreach programs (like those we launched at Cheyenne PD) and by forming task forces to go after criminals to lower record-high crime.

Invest in the employees by implementing professional leadership while focusing on employee development, retention and recruiting.

Forty-seven employees have walked off the job and a survey of employees reveals 62% of those remaining are looking for another job; the employees cite cultural leadership as the problem. Our priority is to change the culture at the Sheriff’s Office.

Change is hard because we usually underestimate our potential. The culture we will create will reflect the realities of our employees working together to reach peak performance. My job is not to tell you what I think, my job is to think about what you tell me. Change will be meaningful; employees will identify the need and we will work together to create goals.

Those who have been around for the last decade know that the Cheyenne Police Department is nothing like the agency it was before I started as its chief. This is not because of me; I only facilitated the environment to allow the employees to reach our potential. It was a slow and well-planned process. I was hired because the community knew the CPD needed to evolve, and I had experience in transforming a police agency in Colorado from one with no public support to one that is highly respected. We know our residents recognize the need of the Sheriff’s Office to change. Thus, changing the leadership culture is priority.

At the same time, we need to work together to fight crime. In 2021, Laramie County had six times the burglaries of Natrona County and we had more burglaries than Weld and Larimer Counties in Colorado — and they have four times our population. Behind every number is a victim, which is why we cannot wait to address this crisis. The most effective long-term solution is for us to implement substance abuse assessments and treatment programming in the jail so we can slow down the revolving jail door that is currently spinning out of control. Other detailed solutions are located at www.BrianKozak.com.

I have been a cop for 35 years with 25 of those years in a leadership or command position. Higher education is not required to be sheriff, but it has helped to become the type of leader I am. My master’s in education experience is why I place a high priority on training and communication with the public. My Bachelor of Business is the reason I challenge employees to set high standards and why I believe in transparency. I have been the head of two police agencies that have become very professional organizations. I know how to achieve results while inspiring pride. I have been a police chief for 15 years; thus, you know exactly what you will get with me as sheriff.

In my first 15 years as a cop and sergeant, I had nothing to do with budgets. I was promoted to section commander in 2001 at Mesa PD. The city had a $2 billion budget and the PD had a $200 million budget. Section commanders were usually in command of 60–100 employees and responsible for the budgets in their section. On average, each section had a budget of $3–10 million; however, the finance section did most of the work in tracking revenue and expenses. I obtained my bachelor’s degree in business administration, in which a great portion of the education is in budgeting and accounting. I became the police chief in Avon, Colorado, in 2006, which had a budget of $3 million. I had to prepare and present the budget to the city manager and town council. Let’s be realistic: The credit for budget management went to Krista, who was my administrative assistant. Civilians are usually the people behind the scenes that make the agency look good. I became chief in Cheyenne in 2010 and became responsible for a budget of $13 million (including fifth-penny capital). In Cheyenne, it was our CPA, Laurie, who tracked the budget; she did an amazing job! Mark Munari assisted me in plaining, designing and building the $27 million Cheyenne Public Safety Center, which was completed under budget and in-schedule. I have never exceeded my budget and I always try to divert excess funds into programs that are usually not budgeted, such as the $7,500 signing bonus for recruiting, tuition/training accounts and safety equipment, such as ballistic helmets for patrol. Many agencies complete their budgeting weeks before it is due. I learned long ago this is a mistake; it should be done during the entire year.

Openness and transparency are both extremely important in policing leadership because they promote trust. If the public and employees can see what you are doing, they are far more likely to trust what you do. As police chief, I made sure we were transparent with use of force boards, annual reports, crime statistics and daily operations to include employee vacancies. As sheriff, I will be open with information important to the public, whether good or bad. As an example, Cheyenne PD is the only agency in Wyoming to place civilians on the Use of Force Review Board.

The Laramie County Sheriff’s Office has not been transparent with the public. For example, they did not release to the public, nor their own employees, the results of their climate survey completed this year. I had to obtain it through a public records request; the survey is posted at https://www.briankozak.com/post/morale-worsens-at-sheriff-s-office. Crime is at an all-time high in the county and the Sheriff’s Office is silent on this issue. The public feels the crime impacting their lives and is losing faith in the Sheriff’s Office. As the police chief, we challenged ourselves annually with goals to attack certain crime trends and then publicized the results, whether good or bad. We will publish annual reports, which the Sheriff’s Office does not currently do. We will release internal surveys to the employees, as I did when I was the police chief. We will appoint a public information officer who is immediately accessible to the media and public for information on a timely basis. Communication is key to successful leadership.

This depends on the topic and type of meeting. If my asking for clarification was necessary for me to make immediate input, I would. If I did not need to provide input at that time, I would most likely wait. I would hope that those who need to understand, do, including myself.

I think most people know that change needs to occur with the Sheriff’s Office to bring it into the 21st century. We do plan on changing the leadership culture of the agency without impacting the healthy traditions of western values. As we did with the police department, change will occur over several years, and it will be supported or implemented by employees. We want to change the agency and employees to become proactive instead of reactive. For example, implementing drug treatment and connecting with community drug treatment resources will be a new concept, but will help us to become proactive in fighting crime.

As sheriff, I will follow the direction of our state legislature about marijuana legalization. The legislature acts on behalf of the people of Wyoming, and I will obey those laws, if they are constitutional. As a peace officer we have discretion in the way we enforce laws. For example, as police chief, we asked officers to cite and release for marijuana cases (treating them as if they were decriminalized) since we were only a few miles away from legal dispensaries. I have been a nationally certified drug recognition expert instructor for 30 years and I have seen the tragedy of drug-impaired driving crashes. I know that legalization will bring an increase in irresponsible use. If Wyoming wanted to go down this path, I would ask our legislature to strengthen DUI laws to make sure irresponsible users are held accountable. I would ask a surcharge to be implemented on convicted DUI offenders to pay for the costs of our state lab to test blood, so the taxpayers do not have to. Finally, the research is clear that there is no medical benefit for cannabis that has a THC content higher than 10%. I would ask that our law be based on scientific research. At the end of the day, the sheriff follows and enforces the laws established by our state legislature unless I believe them to be unconstitutional.

The public will never trust us in our effort to engage in community policing if we do not value constitutional policing as the basis to everything else. Please see my detailed view on this at https://www.briankozak.com/post/will-i-be-a-constitutional-sheriff.