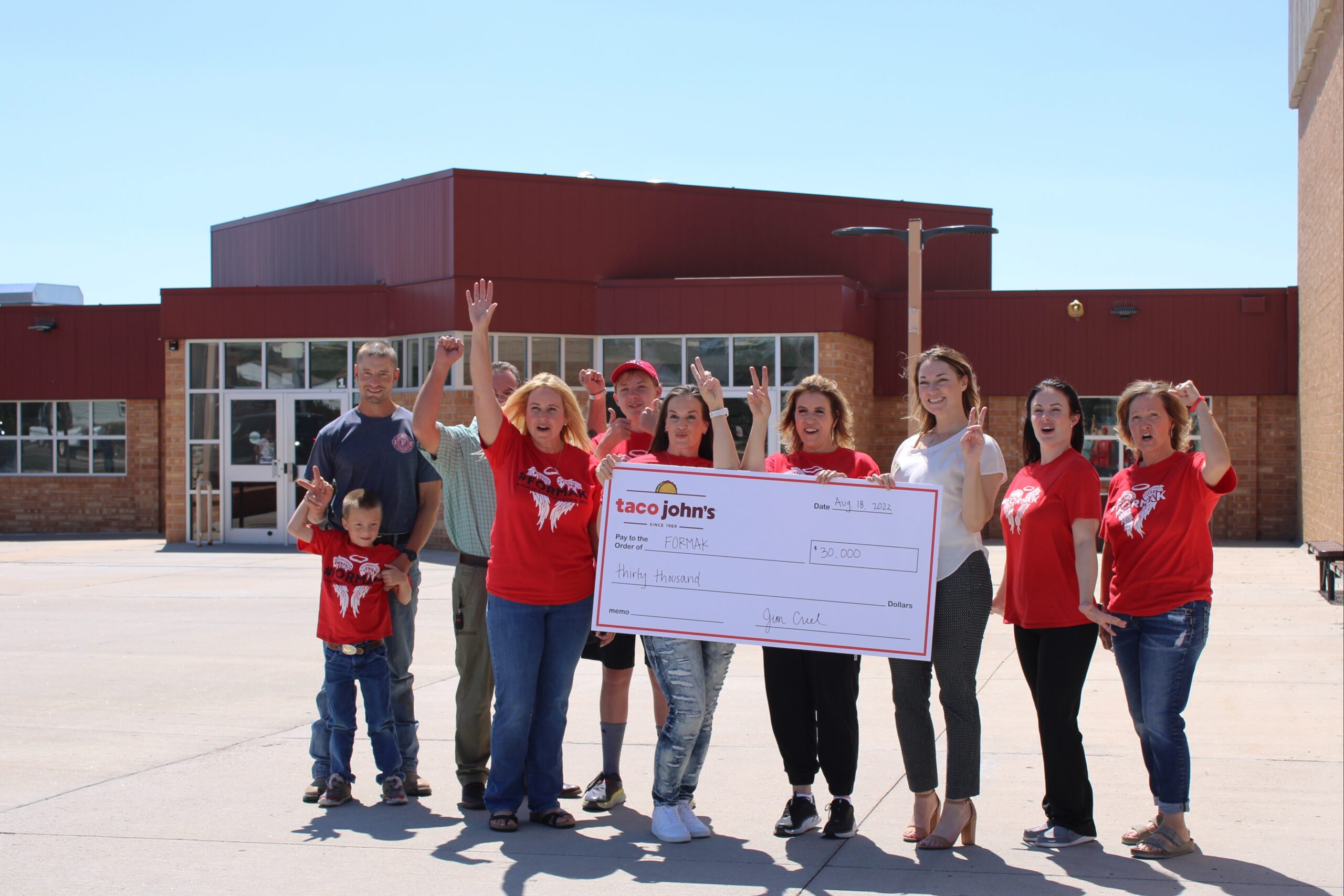 Representatives from Taco John's and the ForMak nonprofit stand with a donation check of $30,000 on Thursday in front of McCormick Junior High School at 6000 Education Drive in Cheyenne. The Cheyenne-based restaurant chain held the check presentation event with ForMak in time for school restarting across Laramie County School District 1 next week. (Briar Napier/Cap City News)

CHEYENNE, Wyo. — The ForMak nonprofit has been building momentum slowly but surely.

Founded in the aftermath of tragedy, ForMak was created when McCormick Junior High student Makaili “Mak” Evans, 13, was killed after being struck by a vehicle while walking on a crosswalk to school this past November. The organization has put in the hours since to raise awareness citywide and statewide for improved safety in and around school zones.

The local community has responded in kind to ForMak’s mission, notably showing up in droves for a 5K run in June that benefitted the organization. But an act of kindness one Cheyenne-based business recently showed especially went above and beyond.

ForMak and restaurant chain Taco John’s (which is headquartered in Cheyenne) held a joint check presentation event Thursday in front of McCormick to commemorate a $30,000 donation made earlier this year from the company to the nonprofit for its goals to establish safer routes to school.

Janelle Jones, Evans’s mother and the main driver behind the formation of ForMak and its push for change, said that she and the organization were “grateful” for the gift and that ForMak would be working with the City of Cheyenne soon to determine the funds required for future updated crosswalk systems both at Western Hills Boulevard (which many McCormick students cross to get to school in the mornings) and at Pershing Boulevard and McCann Avenue, near Baggs Elementary.

The city applied for a federal grant that would go toward the crosswalk improvements, Jones said, adding that ForMak would be willing to help with any additional costs required to make the safety updates happen.

“Working with [the] McCormick Junior High area, there’s a lot of infrastructure work that needs to be done,” Jones said. “It’s not just going to be the lights, it’s the whole infrastructure around that we’ll be contributing to. … The federal money is only there for a short time and so you have to take advantage of those grants when they are available. But ForMak plans to be around for a long time, so we will continue to help them beyond that.”

The president and CEO of Taco John’s, Jim Creel, lives in Cheyenne and told Jones that he was personally affected by her son’s passing due to the fact that his children and grandchildren had gone to McCormick, she said.

With that in mind, Creel came to company Vice President for Human Resources Stephanie Gooden and asked to donate $30,000 from the chain’s foundation to ForMak shortly before its 5K event occurred. Gooden said that Taco John’s was happy to help out a local group working for a good cause, especially one based in its home city.

“While $30,000 doesn’t do everything, we hope that it will protect the kids,” Gooden said. “[Janelle] has been stellar at making sure that we were informed and invited to all the events, and I think she’s just doing a great job of just working with the City of Cheyenne, the police department and everybody else who’s involved. … We applaud her for doing this. I mean, this is huge.”

Gooden credited the many other businesses and organizations around the area that have stepped in to help ForMak out as well, and Jones specifically wanted to give a shoutout to the Cheyenne Board of Realtors for their help and support in establishing awareness — such as creating makeshift signs to be used in school zones this upcoming school year to alert motorists of the presence of children in the area.

The timing of the check presentation event — less than a week before Laramie County School District 1 begins the 2022–23 school year Wednesday — was intentional as representatives from both ForMak and Taco John’s said that they wanted to ensure that driver awareness in high-traffic school zones was especially high as school gets back in session.

When asked if she believes progress has been made in the fight to improve crosswalk safety in the time since her son’s death, Jones said that she thinks there have been positive steps made, but that there’s also plenty of work left to be done.

Jones said that when community members and fixtures step up to try and help make the journey just a bit easier, she couldn’t be more appreciative of the gestures.