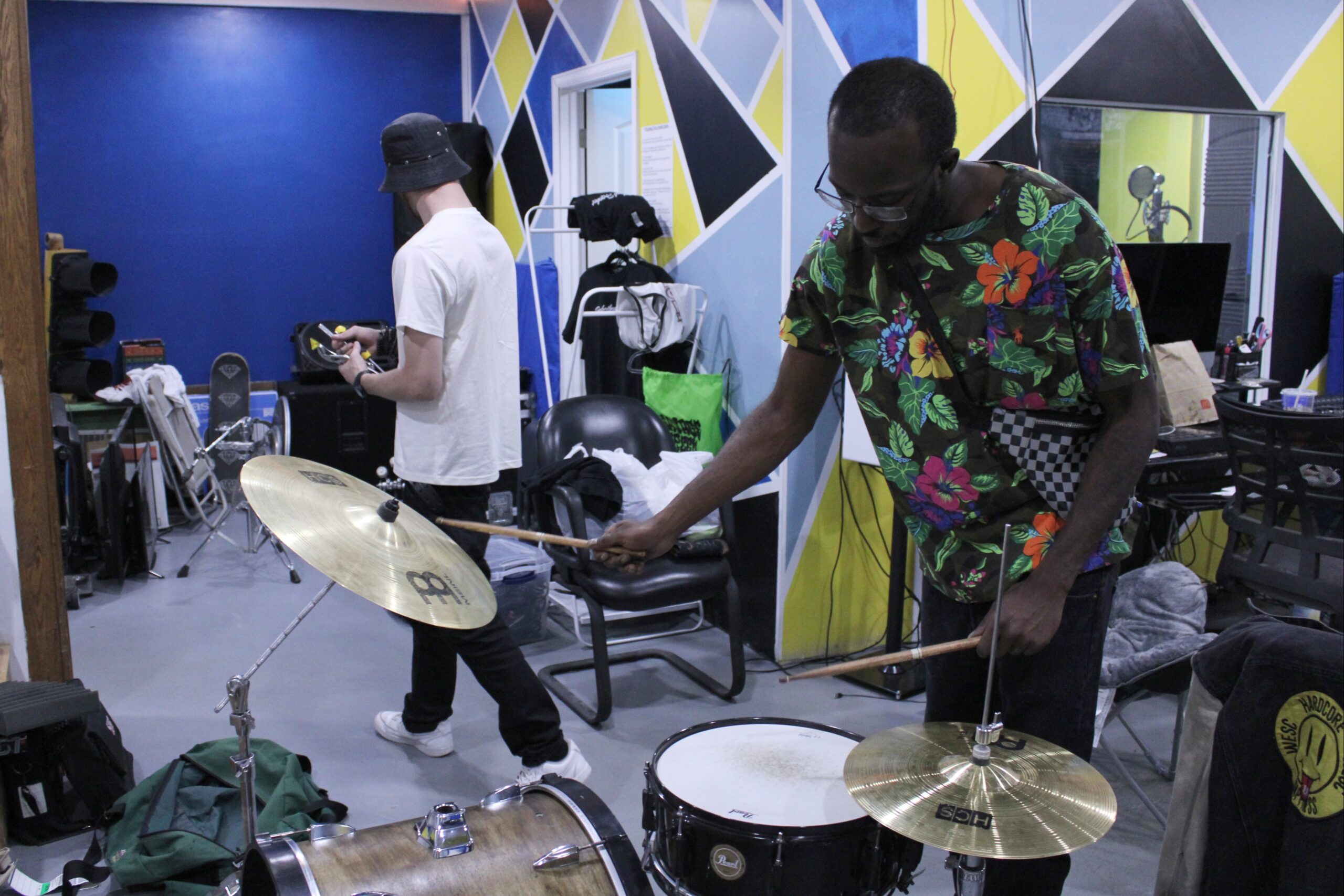 Devante Anderson plays on a drum set inside Wyoming Wave Studios on 1719 Central Avenue in downtown Cheyenne. A musician under the stage name Vanteslayedit, Anderson opened Wyoming Wave in January to help give local artists a venue in town to hone their craft. (Briar Napier/Cap City News)

If you’re let into the coded front door of Wyoming Wave Studios on 1719 Central Ave. in downtown Cheyenne — located in the same building as the Paris West restaurant and what will become The Downtowner at the former Central Plaza Hotel — you’ll often find mulling about co-owners Devante Anderson and Jacob Hrasky, musical collaborators and business partners that just want to see the local music scene (and their own careers) grow.

The duo finds the studio to be a sanctuary, with Anderson often daydreaming about getting back to making music while working his second job at a nearby laundromat. It’s a small studio with little other than musical equipment and various pieces of furniture strewn about, but for Vanteslayedit and Pocketbook Prophet (Anderson’s and Hrasky’s stage names as rap/hip-hop artists, respectively), it’s become a second home.

For the two Cheyenne natives, turning something like Wyoming Wave into a reality in their hometown has been long part of their dreams.

“I’ve been playing music and drums since I was like 5 years old,” Hrasky said. “That led to all of this s— …that’s how much time I’ve really put into trying to actually make music what I do.”

Cheyenne’s drawing power for major musicians was for years largely limited to venues like Frontier Park Arena (for Cheyenne Frontier Days–related concerts) and the Cheyenne Civic Center, with Anderson and Hrasky saying that during their upbringing it often limited independent and local artists to playing at bars and other tiny stages.

In the past decade, however, the city’s music scene has changed drastically. The aforementioned venues are still around, but the rise of Edge Fest — which held its 2022 event this past weekend — and the recent renovation of the Lincoln Theater into a full-scale downtown live music venue has added a new edge to Cheyenne’s entertainment scene. Even the Terry Bison Ranch south of the city near the Colorado border has occasionally gotten in on the trend, bringing in popular country group Whiskey Myers for a show on the property in August.

The men behind Wyoming Wave, who opened the stage performances at this year’s Edge Fest, saw that growth right in front of their eyes and wanted to create a dedicated space where local artists could hone their skills.

Anderson started working in the space in January, with he and Hrasky saying they’re always eager to work with those in the local independent music community and help it flourish.

“I feel like this is a service … just being able to provide some help,” Anderson said. “It’s not all just about taking it [yourself], you’ve got to actually give some care, got to water your plants. You’ve got to be able to do the right things to get the right results.

“We’ve always worked together, but we were always independent artists,” Hrasky said. “And we always made our own beats and learned the business ourselves. We really promote helping artists know the business, know that side of it, and actually have a professional place that they can platform themselves from, you know what I mean?”

Though the duo itself raps, they also noted that Wyoming Wave welcomes musicians and performers from a variety of genres and disciplines. Even comedians and voice actors (such as audiobook narrators) are welcome to stop by for a professional setting to work, they said, as can businesses needing some extra pizzazz for an advertisement like a unique jingle to promote a product or service.

Both men said that they believe there have recently been more people in Cheyenne taking the growth of the city’s music scene seriously and that, in turn, it’s benefitted their own careers by helping them have the confidence in their work to keep going. It’s even led to some places that they never dreamed they could get to previously.

“We opened up for Bone Thugs[-N-Harmony] this year; like, I’ve got to be confident [in my work],” Anderson said, referring to the legendary hip-hop group that performed in June at the Lincoln Theater. “I never thought I would be saying some stuff like that. But things have changed and we’re still working and there’s still music to be dropped that hasn’t even been heard yet.”

The Wyoming Wave crew consists of big dreamers, listing off Red Rocks Amphitheater, Frontier Days and Madison Square Garden as bucket-list venues to perform at in their careers. But as the local music scene seems to have the equivalent of a rocket ship strapped to its back in terms of momentum, who knows? Those aspirations could be manifested into reality one day.

And with a bulletin board inside the studio full of just some of the local artists that are making themselves known in Cheyenne, it seems as if many musicians are riding the wave to grand heights.

“We’re independent artists working with major-label artists as well,” Hrasky said. “The biggest thing [for us] is people take it seriously, and then everybody else involved with us also takes themselves seriously. … There’s a lot of pictures up there we don’t have that we should up there, but that’s who has just come in already. It’s extremely growing.”