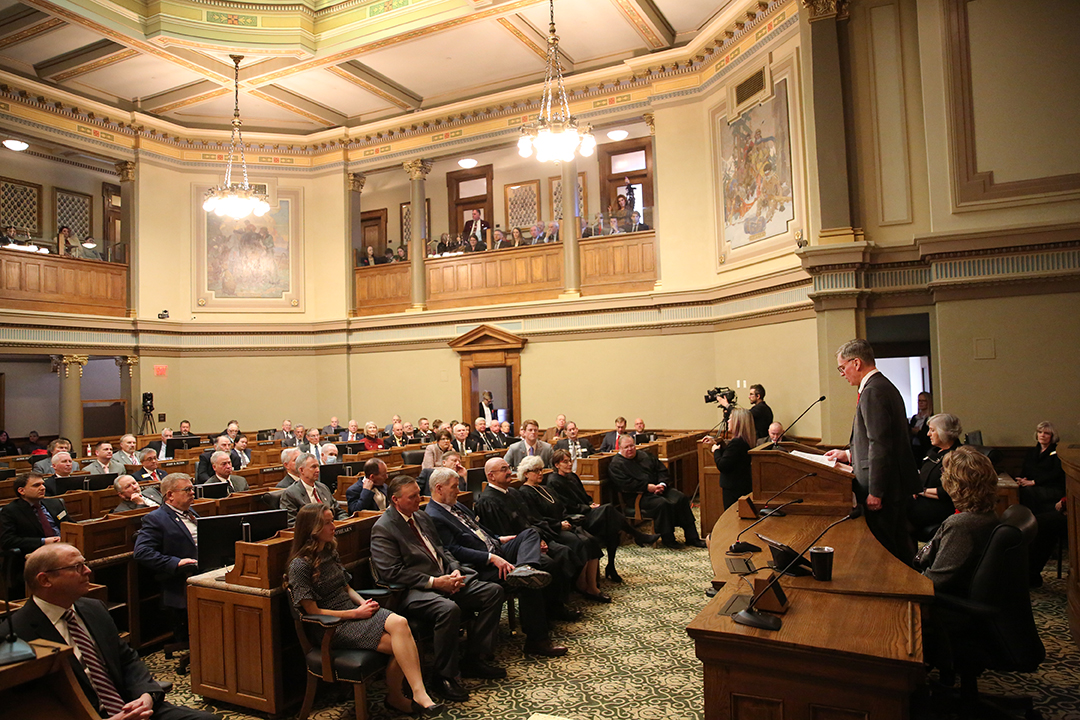 A higher than usual number of Libertarian and Constitution candidates will also appear on the general election ballot for the statehouse in November.

Seven independents, seven Libertarians and three Constitution Party candidates will be on the ballot for the Legislature in November’s general election — the highest number of minor-party and unaffiliated candidates since at least 1998, according to secretary of state records.

Those numbers align with recent election patterns, according to Jim King, a professor of political science at the University of Wyoming. Most of these candidates are running in districts lacking a two-party competition. Only one Senate race and two House races with both Republican and Democratic candidates also have an independent or minor-party candidate vying for the seat.

Some candidates say their choice to run outside the two-party system is in response to the statehouse’s declining decorum and a fractured super-majority Republican party.

Brenda Lyttle is running as an independent for House District 8, a new district encompassing much of North Cheyenne. Her sole opponent is Republican and former legislator Dave Zwonitzer, who served as a state representative from 2006-2016.

“I don’t have to worry about the party labels. I can just say, ‘Here’s me, here’s what I’m for,’” said Lyttle, who works as a private practice attorney. She previously worked for the Wyoming Department of Family Services, a job that introduced her to the Legislature.

“I saw a lot of work getting done and I saw Democrats and Republicans being able to work together,” Lyttle said. But name calling, dissension and party infighting have since gotten in the way of productivity, Lyttle said.

Lyttle is not the first to make this observation. Lawmakers expressed concern this spring that despite spending more time and money to meet, they are passing fewer committee bills into law. During the 2022 budget session, only 59% of introduced committee bills survived to become law — a 23-year low, according to the Legislative Service Office.

Lyttle acknowledged that other independents running for the Legislature may have different political views from her — education funding and Medicaid expansion would be her top priorities — but said she’s encouraged by the fact that seven are running.

“It shows that it’s not just me who is saying we need to break through some of this party gridlock and get some things done,” she said.

Jim Roscoe (I-Wilson), the Legislature’s sole independent member, is not seeking re-election this year, choosing instead to endorse another independent candidate — Bob Strobel.

Despite being a lifelong Republican, Strobel said he’s running as an independent because of the political diversity of House District 22. Before redistricting, it included parts of Teton, Lincoln and Sublette counties. It now comprises parts of the first two. But as an independent, Strobel said he’ll be able to bring together progressive types from southern Teton County with Republicans closer to where he lives with his family in Etna.

While he sees his governing approach as less about his own political opinions and more about the will of voters, Strobel said there are some issues he won’t waiver on, like public lands. He does not support turning federal lands over to the state.

Strobel will face Republican Andrew Byron in the general election.

After losing a Republican write-in campaign for Senate District 23, Patricia Junek will also run as an independent against Speaker of the House Eric Barlow (R-Gillette). Barlow earned 3,355 votes in the primary election, while 814 were Republican write-ins. How many of those were for Junek is unknown, according to the Campbell County Clerk’s office, since write-ins were not processed when they did not exceed the number of votes for the candidate on the ballot.

The Constitution Party of Wyoming was first organized in 2010. The 2022 general election will mark the most legislative candidates the group has ever had on a Wyoming ballot  — one candidate running for the state Senate and two for the state House. All three candidates came to the party for the same reason, according to Chairman Jeff Haggit.

“They were disappointed, or upset or disillusioned, however you want to word it, with the Republican Party,” Haggit said. What sets his party apart from the GOP is a deeper commitment to “our God-given right of life, liberty and the ownership and control of property,” according to Haggit.

“We don’t try to test the winds of political change and maybe try to appease the general movement,” said Haggit, who feels the GOP has moved to the left.

Overall, the Constitution Party’s numbers in the state have not changed significantly in the last couple of years, Haggit said, but he thinks this year marks the start of something. He also believes voters have grown more open to voting outside of the two major parties.

The Libertarian Party has made greater strides as a minor party in Wyoming in recent years. In 2020, voters elected the first minor-party legislator in more than a century when Rep. Marshall Burt (L-Green River) beat incumbent Democrat Stan Blake for House District 39. Burt was also the first Libertarian anywhere in the country to win a statehouse race since 2002.

“Even with one of the most fiscally conservative voting records in the statehouse, I have built relationships with legislators with all ideologies to explore better ways forward,” Burt said in a July Facebook post.

During his first term, Burt was lead sponsor of Wyoming’s first “tri-partisan” piece of legislation. House Bill 81 – Operation of motorcycles-disabled persons, which is now law, updated motorcycle operation and equipment requirements to allow for use by persons with disabilities. Also a first, House Speaker Barlow allowed Burt to form a caucus for the Libertarian Party during the 2022 session, despite being the body’s only member.

Burt will face Republican Cody Wylie in the general election.

Neither Burt nor the Libertarian Party of Wyoming responded to WyoFile’s requests for comment.

Libertarian and Constitution Party candidates are also in the running for governor and Wyoming’s U.S. House seat.

The general election is Nov. 8.