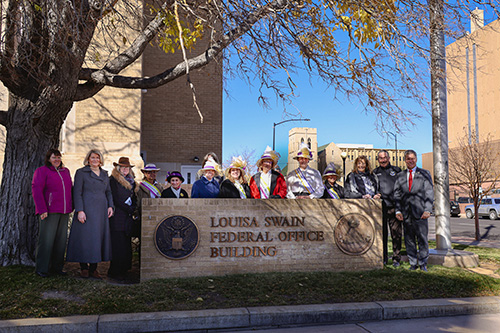 At 70 years old, Swain — a Laramie resident — cast her vote in the general election of 1870, 50 years before the United States ratified the 19th Amendment to the U.S. Constitution, making Wyoming the first state to continuously recognize women’s voting rights.

“In renaming this building, I wanted to highlight Wyoming’s moniker as the ‘Equality State,’” said Senator Lummis during the unveiling ceremony. “It is important to honor the women in our state who accomplished trailblazing firsts in our nation. Ultimately, it seemed fitting to honor the first woman to cast her vote in Wyoming — Louisa Swain.”

Senator Lummis was joined by Senators Chris Van Hollen (D-MD), John Barrasso (R-WY), and Ben Cardin (D-MD) in introducing S. 2126 to rename the Federal Office Building in Cheyenne, Wyoming. This bill was unanimously passed in the United States Senate and in the House of Representatives, with 412 votes in the affirmative.