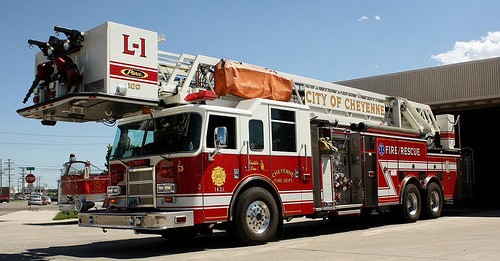 Courtesy of Cheyenne Fire and Rescue

CHEYENNE, Wyo. — A burn victim was found by Cheyenne Fire Rescue after it responded to a fire on Monday, Nov. 8.

At 5:19 a.m., the CFR squadron was dispatched to the 1000 block of West 20th Street. Upon arriving on the scene, firefighters located one burn victim in the front yard of a one-story residential home, as fire seared from the front door and onto the front porch.

While the American Medical Response team provided care to the patient, units from Engines 1 and 2 and Ladder-1 rapidly began extinguishing the fire. The fire was under control by 5:29 a.m.

Officials are currently investigating this incident and the scene has not been cleared. The cause of the fire is unknown, with estimated damages totaling $5,000.

The house and property were full of stored materials which hampered search and extinguishment, but no other occupants were located inside the dwelling.