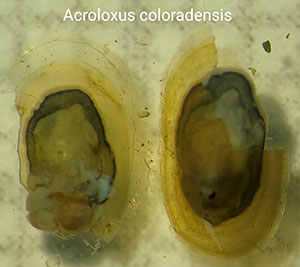 A team of researches recently discovered the Rocky Mountain capshell snal in the Snowy Range, the first time the species has been documented in Wyoming. (Bryan Tronstad, UW)

CASPER, Wyo. — A rare snail species known as the Rocky Mountain capshell was recently discovered for the first time in Wyoming by a group of researchers led by the University of Wyoming.

The Rocky Mountain capshell, Acroloxus coloradensis, had previously been discovered in six lakes in Colorado, one in Montana and in remote areas in Canada, but the recent discovery in the Snowy Range was the first in Wyoming, UW said in a news release Friday.

“We found a new snail in Wyoming,” Lusha Tronstad, inteverebrate zoologist who led the research through the Wyoming Natural Diversity Database, said. “This species is rare, only being known from seven other lakes in the U.S.”

Wyoming has 37–39 species of snails, according to UW. The research study identified 18 of those species in streams, lakes and wetlands. Other aspects of the study included research into water quality and habitat characteristics.

“We found snails at 53 percent of sites we surveyed, and they were usually most abundant in ecosystems with more algae; substrate, such as wood and aquatic vegetation; and in habitats with slower water velocity, including backwater and margins of streams,” Tronstad said.

“The Rocky Mountain capshell is a rare species that only occurs in a few locations, which are typically mountain lakes,” Tronstad said. “Rare species contribute to biodiversity, and rare species can have large effects on ecosystems despite their status. Very little is known about these snails.”

The rare snails eat algae by scraping single-celled plants off of rocks and logs, according to Tronstad. They are limpets that have a single shell that is cone-shaped.

The Rocky Mountain capshell might live in other lakes in Wyoming but are difficult to find, UW said.

“Snails are a diverse group of animals that live in all aquatic habitats,” Tronstad said. “We found snails in large and small streams, wetlands, ponds, lakes, reservoirs and springs. We discovered snails in about half of the aquatic ecosystems we surveyed, and one thing that may limit them is the amount of calcium in the water.

“Snails need calcium in order to secrete their shells. Most snails prefer slower water, probably because there is less chance that they will be swept away. Carrying their houses on their backs makes them more likely to be swept away by the current compared to other aquatic invertebrates.”

New information about a variety of snail species was collected in the research and will help inform wildlife action plans in Wyoming, according to UW. The findings will also be incorporated into the WYNDD website.

“The more information we have about snails, abundant or rare, the better the decisions that can be made to manage them,” Tronstad said. “As we collect more data, we can make more accurate state and global ranks.”

Bryan Tronstad, assistant invertebrate zoologist with WYNDD, co-authored the paper. Others involved in the research included Michelle Weschler, a graduate student in the UW Department of Zoology and Physiology; Sasha Maxey, a WYNDD technician; Tresize Tronstad, a Laramie High School student; and Rob Dillon, a North American snail expert, according to UW.

The research received funding from the Wyoming Game and Fish Department’s Fisheries Division, according to UW.