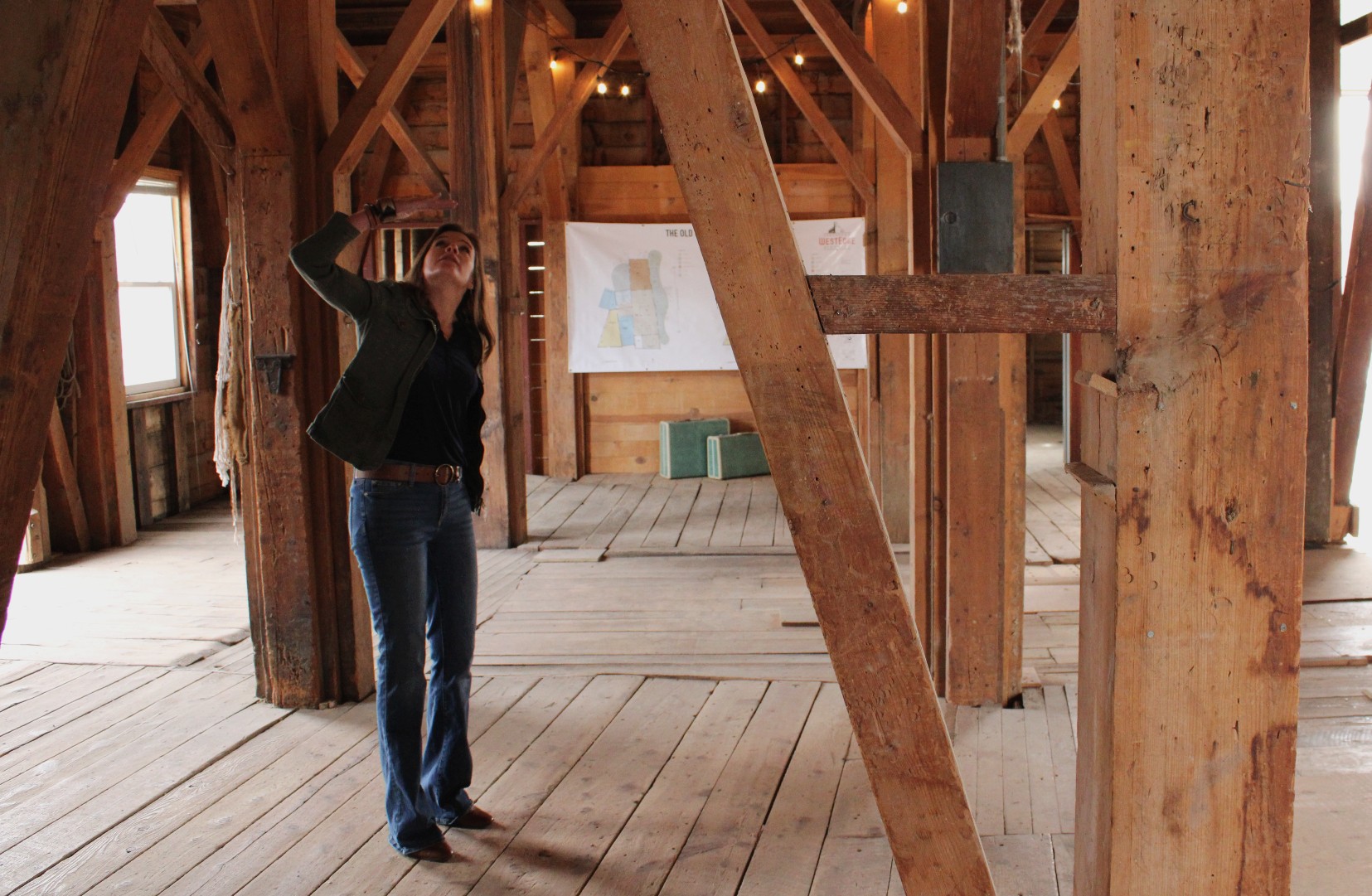 Janelle Rose walks through a formerly-used grain elevator that she co-owns Tuesday at 802 W. 21st St. in Cheyenne. If the property owners' acquire a liquor license in the coming weeks, the property will transform into the Old Cheyenne Elevator, revamping the property into a bar and package liquor store with built-in space for food trucks. (Briar Napier/Cap City News)

The building is a former grain elevator, and the walk inside is like a trip back in time. What could be decades-old writings, chicken scratches and other various nicks line the wood and pillars that used to house the grain and feed that helped sustain the livestock of numerous area ranches.

But in the 110 years after the elevator was first built, the city around it has evolved and its original purpose has no use anymore. For a team of local businesspeople, it only makes sense that the building is reimagined right with Cheyenne, too.

A quartet of Wyoming-based entrepreneurs — Cheyenne’s Janelle Rose and Jen Seitz, plus husbands Andy Rose and Greg Seitz — are looking to transform the over century-old building into the Old Cheyenne Elevator, a hybrid package liquor and bar concept with a built-in gap inside once meant for vehicles to haul grain, now reimagined for food trucks to deliver grub to hungry bargoers.

The establishment’s opening is contingent on the Cheyenne City Council awarding the property’s ownership (known officially as Ful-O-Pep LLC, the namesake of a massive decal plastered on one side of the grain elevator) a liquor license within the coming weeks. That’s much easier said than done as multiple other concepts — such as one going on at the West Edge Collective building — are vying for the same permit.

However, the elevator owners hope that their commitment to protecting a part of Cheyenne’s history and reinventing it for a new age will do just enough to put their project over the edge against their peers.

“Preservation is huge. It is absolutely, I would say, one of our priorities in developing the building,” Jen Seitz said. There have been people who’ve come out and said, ‘My uncle owned [the building] during this time,’ or ‘I used to play there when I was a kid.’ … We’ve had some really fun tales of memories that have all happened in this building, so I think to us, that is a huge priority.”

The property was purchased by the current owners in 2016 alongside two other then-abandoned warehouses plus a Victorian-style home built sometime in the late 1800s that the owners affectionately call the “Mini Vic.” When the city approved a zone change in 2020 to allow the property to switch from “light industrial” uses to “mixed-use business” ones, the warehouses then became Blossom Yoga and Hammock Fine Art, which are respectively operated by other business owners in town.

If approved by the council, development of the elevator building into the business would come in two phases. First, an already-built structure connected to the elevator itself would house a package liquor store opening later this year with a focus on “locally sourced spirits and beers,” according to Seitz. Second is the grain elevator development itself, which would contain a full-service bar with restaurant-style seating space along with a gathering section that would be able to be rented out by patrons.

Between the converted warehouses and elevator is also a courtyard space that has been used in the past for events such as Edge Fest, a yearly free music concert in the city. In the warmer months, the property owners hope to open up the garage doors that close off the elevator to create an even larger gathering space. In the distant future, the “Mini Vic” could be the home of something along the likes of a coffee house or wine bar, per the owners.

“We talk a lot about [the River North Arts District] in Denver and just the fact that it’s an industrial part of town that’s been converted into an arts and retail and entertainment district,” Janelle Rose said. “And that’s something that a few of us have always felt really strongly about — mostly me — but I really want to foster the arts [in Cheyenne] as well.

“Our concept is dependent on receiving that license. We’ve cross-referenced all other types of licensing, so we do feel that our project ticks off some of the boxes that the council has asked for for that application process.”

What could help the Old Cheyenne Elevator in its favor during the selection process is that the property is along both the Reed Avenue Rail Corridor and the West Edge area-wide plan, two years-long projects from the city that aim to revamp what was an industrial-heavy area into a vibrant section of the city filled with shops and entertainment. The railroad that goes through the area is steps away from the property as well, which Rose remarked makes it one of the few properties in the corridor that “celebrates the history of the railroad itself.”

The owners invited council members and other stakeholders to view the property before Ful-O-Pep officially submitted its liquor license application Jan. 28, bringing in a food truck for added visualization of what the elevator could become. Whether that influenced the decision-makers just a bit more, however, will be known later when the council votes on which entities to grant the licenses.

“Since we’ve been owners, we’ve been in touch with folks,” Seitz said. “I think they’ve been interested in what we’ve been doing down here, but they’ve also been wonderful resources. I know the city planning committee is working on [the question of] what does an overlay look like? How does our city help not just this property, but all the properties of the area grow and develop? We’ve been really fortunate to be part of a lot of these conversations.”

There is no pleasure, knowing that liquor licenses are limited in Cheyenne, for Rose and Seitz in competing against numerous other ambitious projects around the city for a permit. Both admitted there are opposing concepts that they said “they’d love” to see in the city, but the environment at hand makes it impossible for everyone applying to get their way.

Whichever entity gets the license needs to stand out above the rest. And with history literally on its side, the Roses and the Seitzes hope that the city slides their direction.

“When the city council identified that they were going to go ahead and move forward to a potential award of a new license, one of the things that they specified was that it addressed the need to restore a blighted property in downtown Cheyenne,” Seitz said. “And I think ours is most certainly applicable there. … While other things are wonderful development opportunities, this particular property is a restoration project. It’s breathing new life back into something that will now have a new face and a new purpose and function for our city.”