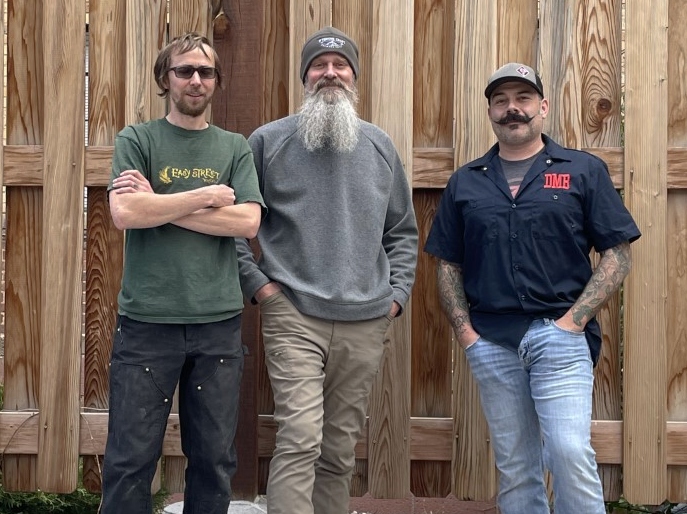 CHEYENNE, Wyo. — Richard Hart didn’t exactly plan on being a co-owner of a brewery late last year, but when one of his favorite spots to grab a beer suddenly had an uncertain future, he and some friends knew they had to quickly act.

In mid-November, Hart found out news that he said sent him into a “moment of panic”: Danielmark’s Brewing Company — a popular microbrewery on 18th Street downtown — was going to have its location sold as its owners (Paul and Beth Warntz and Daniel and Kim Combs) were leaving the industry, at least in Cheyenne.

Hart didn’t want to see Danielmark’s transformed into something completely different, and as an Air Force veteran and craft beer lover also wanted a new challenge and project to pursue. Therefore, he got to work on something that he said the military never prepared him for — talking business.

“I was like, ‘Oh, my gosh, this is my hangout,'” Hart said. “What if it changes? What if I don’t like the new owners? … I was kind of searching for my next true passion.”

Within days of him getting the news, Hart teamed up with two current Danielmark’s employees that he had befriended over the years — Ryan Willson and Kevin Tighe — and formulated a plan to purchase the property from the prior owners. All were “gung-ho” about joining in, Hart noted, and following an official purchase, the path to having their own brewery began.

Over six months later, that day has nearly arrived.

Danielmark’s will begin the transition to Blue Raven Brewery — new name, same location — starting next week as the brewery will briefly close from Monday to May 23 for some renovation and redesigning. But once the soft opening occurs May 24, the Blue Raven crew will aim to build upon Danielmark’s foundation and keep the building a sustained hotspot for Cheyenne’s craft beer scene.

“I think one of the biggest concepts with Danielmark’s in terms of the spirit of the location and the community that comes here is a sense of community,” Hart said. “The regulars here are very open to newcomers. Very often, especially when it’s crowded, we’ll see people walk in, they get invited to our tables and stuff like that. It’s a very open, welcoming environment, and we hope to preserve that.”

The major changes to the property are going to come over time, but Hart did remark that Blue Raven plans to go “event-crazy,” including plenty of live music on its back patio in the warmer months. New signage, a renovated deck and other features are coming as well, with Hart saying he hopes that extra seating capacity will be available by Cheyenne Frontier Days in late July.

One thing that won’t change much, however, are the flagship beers, at least in taste. Blue Raven will have five constant and five rotating beers (a change from Danielmark’s six and four, respectively) with identical recipes — yet different names — to the beers done at Danielmark’s. For instance, Danielmark’s “Old Regret” Irish red ale will become Blue Raven’s “Rusty Mountain,” a change present throughout the drink lineup.

However, the rotating options will give the Blue Raven crew a chance to test out new creations from time to time. Hart said he isn’t as keen on the brewing process himself, but expressed plenty of confidence that his partners will produce great beer.

“Closest I’ll get to making beers is just helping Ryan clean in the brewery,” Hart joked. “I’ve looked over his shoulder a lot lately and it would take me years and years and years to get caught up to where I could actually brew a batch to his level. He’s a very talented brewer.”

Danielmark’s fans will get a chance this weekend to say goodbye to the outgoing ownership as part of a going-away party from 1 p.m. to closing Saturday, marking the occasion with a party featuring live music, cornhole, food trucks and, of course, plenty of beer. But once the final thank-yous are shared and last toasts are announced, the Blue Raven era on 18th Street will have a chance to get going.

The changes coming to the location are good ones, Hart said, speaking as a mere brewery regular before full-fledged ownership. One day, a Blue Raven newcomer could be inspired to take a swing at the craft beer business, too — just like Hart is doing now.

“Of course, as always, [it’ll be] family friendly, dog friendly; bring the kids [and] bring the dogs,” Hart said. “It’s a bit intimidating, but I’m excited at the same time.”