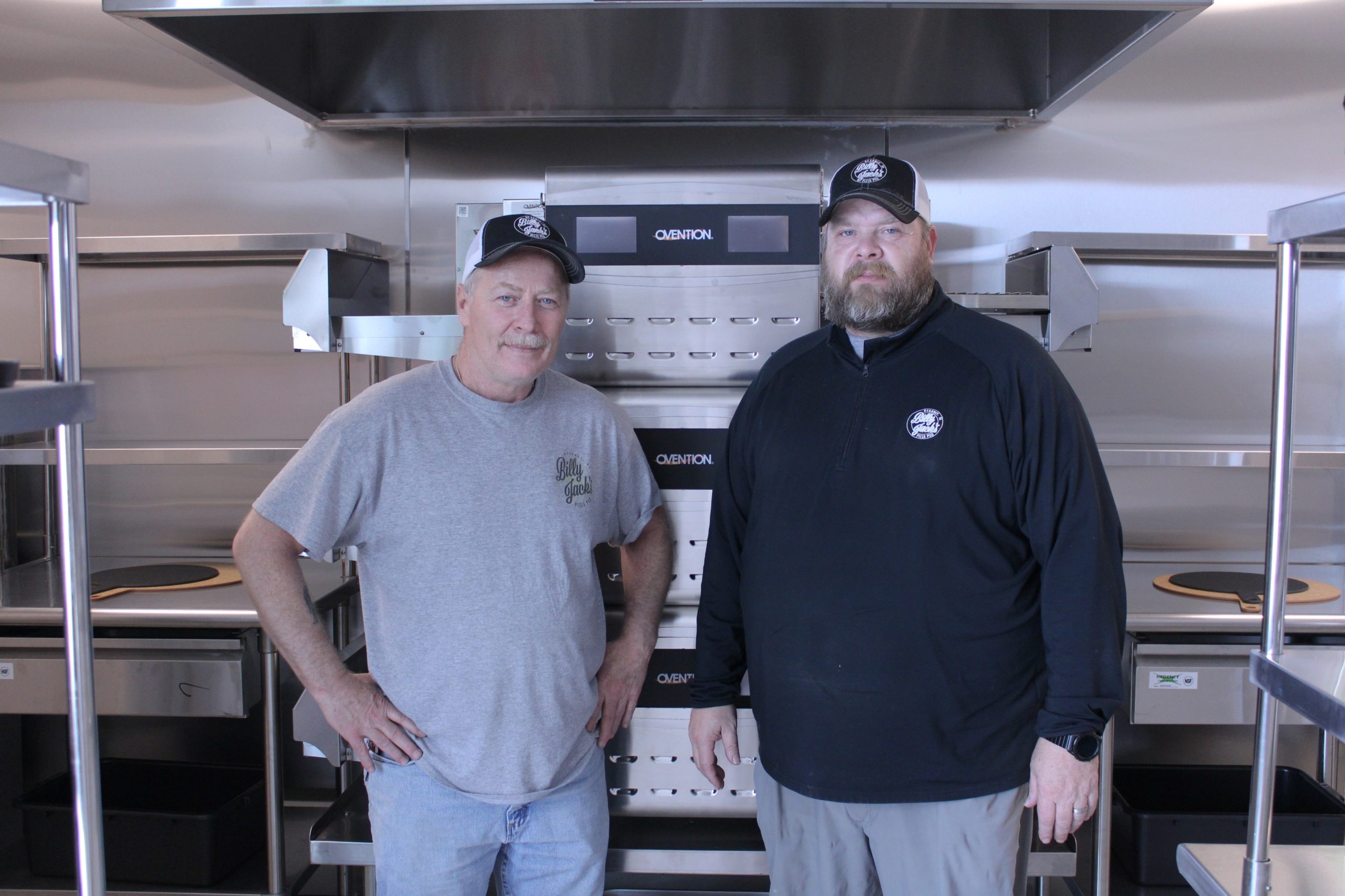 Billy Jack's Pizza Pub's Jerry Cox (left) and Brian Benedict (right) stand within the kitchen at the restaurant's future location at the Cheyenne Regional Airport on Tuesday in Cheyenne. First opening in April 2021 in Kearney, Nebraska, the chain will mark its first location outside Kearney with a dual-building setup in Wyoming's capital. (Briar Napier/Cap City News)

CHEYENNE, Wyo. — The people behind Billy Jack’s Pizza Pub have some lofty aspirations in mind.

But if an aggressive expansion campaign hardly a year after opening its first restaurant is any indication, Cheyenne might be a getting a household name in the making.

The fast-casual pizza joint is currently putting the infrastructure in place for restaurants outside its home base of Kearney, Nebraska, picking Cheyenne as its first foray outside the city of just over 30,000 in the central part of the state.

An opening date isn’t set in stone yet for the Cheyenne expansion, which will feature a unique two-building setup that’ll have both a sit-down location at the Cheyenne Regional Airport and what it called a “delivery hub” on 920 S. Greeley Highway that handles external orders. Billy Jack’s leadership said in an interview Tuesday that they saw Cheyenne as a “gateway” to more spots in more cities, noting that support nearby made it a “no-brainer” to head west.

“[Cheyenne] is just north of major metropolitan Denver, and anybody that travels I-80 comes right through here,” Brian Benedict, the secretary and treasurer of Billy Jack’s, said Tuesday, “so it was just a great fit with what we could bring to Cheyenne and what Cheyenne offers us.”

The brainchild of founder and namesake Billy Jack Winberg, the restaurant said it has paired with investors in multiple states, including Wyoming, since first launching the Kearney shop in April 2021. But when it comes to Billy Jack’s food, even the most hardcore of pizza lovers would be hard-pressed to find themselves running out of options.

The restaurant has what it calls a “D.Y.O.” — design your own — pizza option with oodles of crust, sauce, glaze and topping choices to choose from, plus a variety of specialty pizzas. For those not in the mood for a slice, there are salads, appetizers and open-faced sub sandwiches, too — and even some breakfast and dessert options.

The pizzas are then baked in an oven that Billy Jack’s says can finish cooking a pie in about two and a half minutes, and are then immediately served to the customer at the sit-down location. If it’s a delivery order, the delivery hub cooks, then transfers the order to a service such as DoorDash, which takes it to the customer that way. The delivery hub, unlike the airport location, will not have dine-in seating.

“We’ll definitely do what’s convenient for them,” Director of Operations Jerry Cox said, noting that the delivery hub would also have a to-go window. “It’s not a problem. We mainly want to serve out of [the delivery hub] for to-go and stuff, but we’ll do to-go out of [the airport location] as well.”

Speaking of locations, why did Billy Jack’s opt to build its Cheyenne sit-down spot inside the airport? An open restaurant space within was a plus, Cox said, and the speed and timeliness the restaurant says it can provide offers a great meal option for fast-moving travelers.

Making Billy Jack’s a destination in its own right is a goal, the restaurant said, noting that it wants to grow right along with Cheyenne, too.

“It’s a great location,” Cox said. “The airport here, the effort they put into this building and to make this a destination-type place. — We were just the perfect fit. With our speed that we can get stuff out, nobody’s waiting. If you arrive a half-hour before your flight, you have time to come in and have a beer and have a pizza.”

With the locations nailed down, it’s going to take a few supply chain–related issues to sort themselves out for Billy Jack’s big project to finally get going, the restaurant said. But when that happens, it believes it has a pizza that’s going to keep Cheyenne coming back for more.

And after a successful year in Nebraska, it’s decided to give Wyoming a piece of the pie.

“You know, anybody can open a pizza joint,” Benedict said. “But when you have a good, solid foundation of the crust and you’ve got great sauce, those are what’s making the pizza, and that’s what we’ve got. The team has done their due diligence of putting all that together to get where we are.”