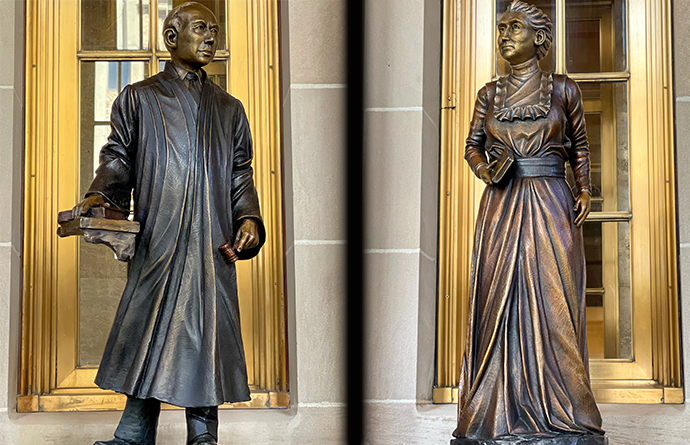 (Photo courtesy of the City of Cheyenne)

CHEYENNE, Wyo. — The City of Cheyenne has announced two new statues on display in the foyer of the Wyoming Supreme Court Building at 2301 Capitol Ave.

Mayor Patrick Collins commented on these statues in Monday, June 13, release saying, “We installed the first of many statues that will depict important men and women in Wyoming history. Today’s focus has been on Wyoming’s contribution to law. In coming months, there will be statues of the explorers and settlers, our native population, statesmen and women, military heroes, and our contribution to American arts and letters.”

Chief Justice Kate Fox of the Wyoming Supreme Court also commented on the importance of the statues.

“We are pleased to host the bronze statues of these iconic figures in Wyoming’s legal history. They will stand near our Equality Hall, which is an exhibit highlighting the many women to achieve ‘firsts’ in law,” she said.

“No one in Wyoming history has held higher judicial office than Willis Van Devanter and no woman in Wyoming or American history held any judicial office before Esther Hobart Morris,” Nathaniel Trelease, chairman of the Capitol Avenue Bronze Project, said. “Together, a Wyoming man and a Wyoming woman, each living in a different era, will stand together on Capitol Avenue symbolizing equal dignity before the law.”