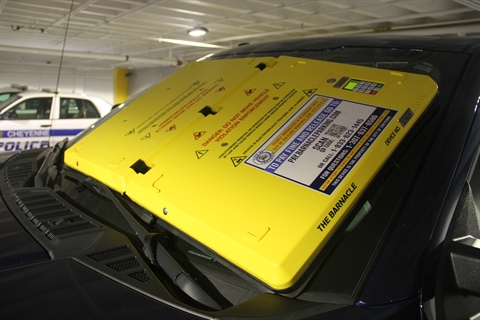 A barnacle placed on a car windshield similar to the ones that the City of Cheyenne has begun this year placing on vehicles with multiple outstanding parking tickets. (City of Cheyenne)

CHEYENNE, Wyo. — For those in Cheyenne who have gotten away with unpaid parking tickets in the past, their luck may be running out soon.

The City of Cheyenne said in a news release Thursday that it was “on the hunt” to find and “crack down” on vehicles in the city with multiple outstanding parking tickets attached to them, stating that it would not hesitate to use the car barnacle on frequently offending vehicles to immobilize them until their drivers pay up on any fines.

The barnacle — a parking enforcement device that suctions to a car’s windshield and can’t be removed until a hefty fee is paid — is essentially an updated version of the car boot that, unlike boots, can be removed by vehicle owners themselves. Mayor Patrick Collins has long called unpaid parking tickets a problem in Cheyenne, stating in the Aug. 8 City Council meeting that around 3,400 outstanding citations, totaling around $204,000, are currently in the city’s system.

Three unpaid parking tickets appears to be the threshold at which the city will barnacle a vehicle, per its release, though payment plans are available through the city if any fines are unable to be paid all at once. Barnacles will only be applied to vehicles without cracked windshields, the release said; those that have cracked windshields and outstanding parking tickets will be subjected to the car boot.

Further information about what the barnacle is, how and when it’s used and how to remove it has been previously reported by Cap City News, with a more detailed explanation located here.

“The vehicle owner can pay their fines by calling the number listed on the device or by scanning the QR code,” Cheyenne Police Department Parking Administration Manager Ted Miazga said in the city’s release. “When payment is received, a release code is generated, and the individual returns the Barnacle to a drop box location,” Miazga shared.

The city had previously announced a one-month amnesty period for parking tickets earlier this year, allowing those cited to pay off any outstanding fines without any late fees accrued. Parking tickets in the city become overdue 15 days after the issue of the citation, and after that a $30 late fee is applied.

Parking tickets can be paid in-person at the Cheyenne Public Safety Center on 415 W. 18th St. or by contacting Miazga at 307- 637-6586 or tmiazga@cheyennepd.org.

Drivers may request a hearing to contest citations by visiting parkcheyenne.rmcpay.com.