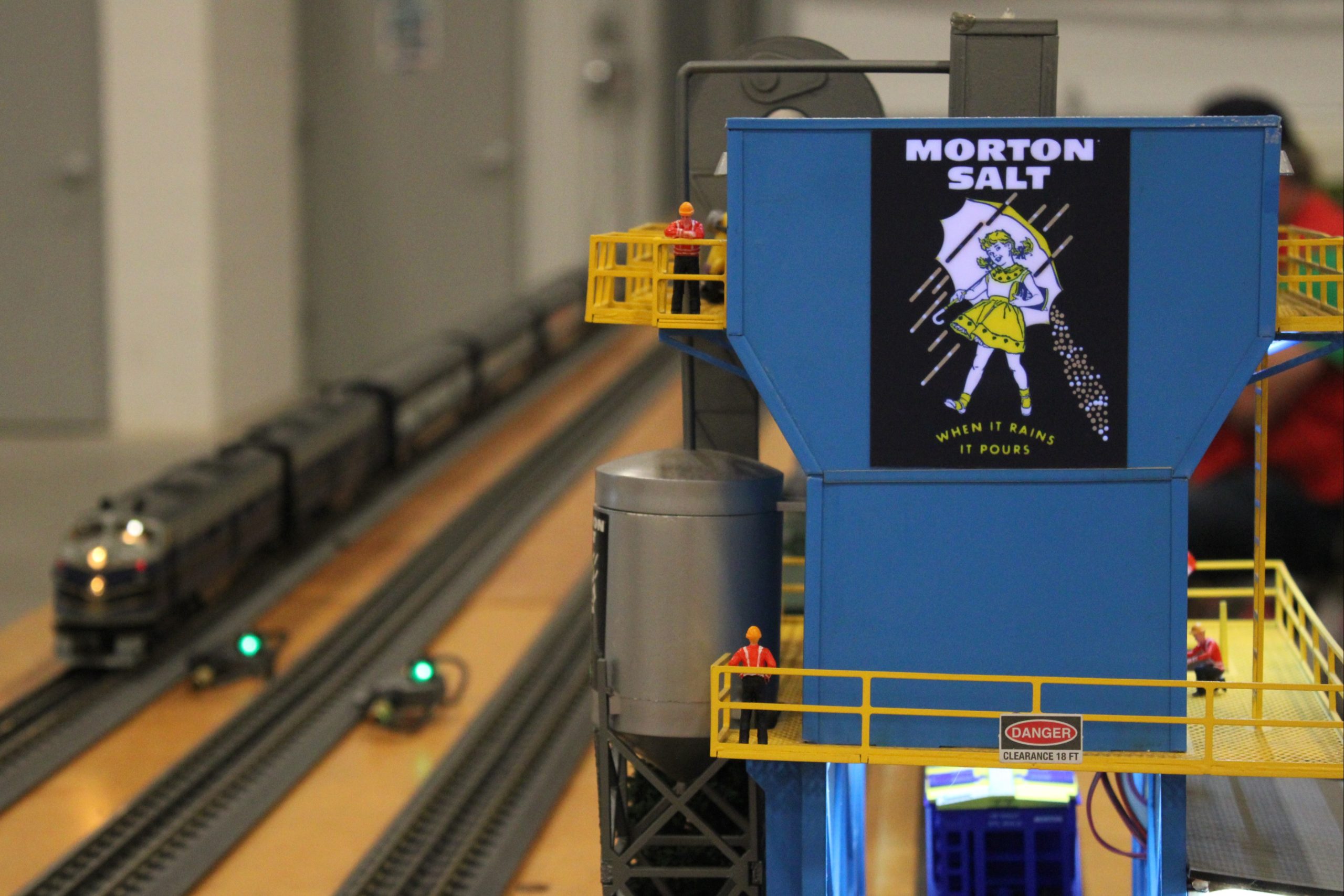 A model train exhibit hums along Sunday during the Sherman Hill Train Show at the Archer Events Center outside of Cheyenne. (Briar Napier/Cap City News)

CHEYENNE, Wyo. — In the 13th edition of the annual Sherman Hill Train Show this weekend outside of Cheyenne, the stories were all in the details.

Building model railroad exhibits is a hobby that demands time, patience and a fierce commitment to minute features and particular parts of what later becomes a masterpiece. With exhibits at the show featuring flashing lights, near-perfect models of terrain and countless other creative looks, it isn’t as simple as slapping a model train on a track and calling it a day.

“Countless,” Jon Zook, a member of Denver-based club Near Sighted Narrow Gaugers, said when asked how many hours it took for his team to complete their exhibit. “I can’t even tell you. … As you go around and you see each module, envision that [that] modeler put in at least 100 hours of work in their module sessions. And many times, it just goes up from there.”

However, that attention to the finer things was rewarded right back by the show’s organizers themselves — by a bigger, better venue to welcome back model railroad enthusiasts in style.

This year’s showcase was held across a two-day event Saturday and Sunday at the new Archer Event Center building, providing increased space and brighter lighting — a key component of model railroad presentation — as both solo and teams of engineers came to Wyoming’s capital to show off their contraptions.

Sherman Hill Model Railroad Club President Jared Chicos, one of the leaders of the Cheyenne-based organization that has had a presence in the city for nearly three decades, said that event space doubled by square footage with the move to the Archer Complex off of Interstate 80 east of Cheyenne. He said that he originally worried about not being able to take up all the building’s open areas, but the clubs and exhibits on display did that for him.

“The first time I walked in here with our show committee, I’m like, ‘Man, how are we going to fill this?'” Chicos said. “[The committee has] done a phenomenal job over the last number of years of putting the show together, and I can’t give them enough praise. … It’s not just putting the show on in a couple of months; they work throughout the year getting contracts in and out.”

Sure enough, the show committee managed to get plenty of skilled heads and hobbyists to come together to show off their stuff this weekend — and from places far and wide, too.

Chicos said that layouts came from the likes of nearby states such as Colorado and Utah, but also as far away as New Mexico and Illinois. He noted that a block of hotel rooms were provided for those in the show that needed them, and many of them brought influences of where they came from with them.

The Near Sighted Narrow Gaugers’ exhibit, for example, won “Best in Show” for a massive project of railroad modules set in Colorado across various decades. One part of the exhibit was set in the 1890s with décor and time-correct train cars to match, for example, while the same was done for another module set in the 1930s.

“Our modules are designed and made to look like what the railroads up in the Colorado mountains would have looked like,” Zook said. “Some of them are based on actual locations [that] no longer exist but once existed on the lines, while others are fictional. Some things, we came up with in our heads, but again, [it] kind of mimics what you would see in the mountains.”

Chicos said that despite the increase in size of venue, gate numbers appeared down from years past, with him citing the venue change, the current state of the economy and increased gas prices as suspected reasons why. But from vendors themselves, he noted that they’ve been overall pleased with the setting this weekend.

And as the model trains kept humming along until this year’s show closed Sunday afternoon, there was plenty of setting — and scenery — to go around, too.