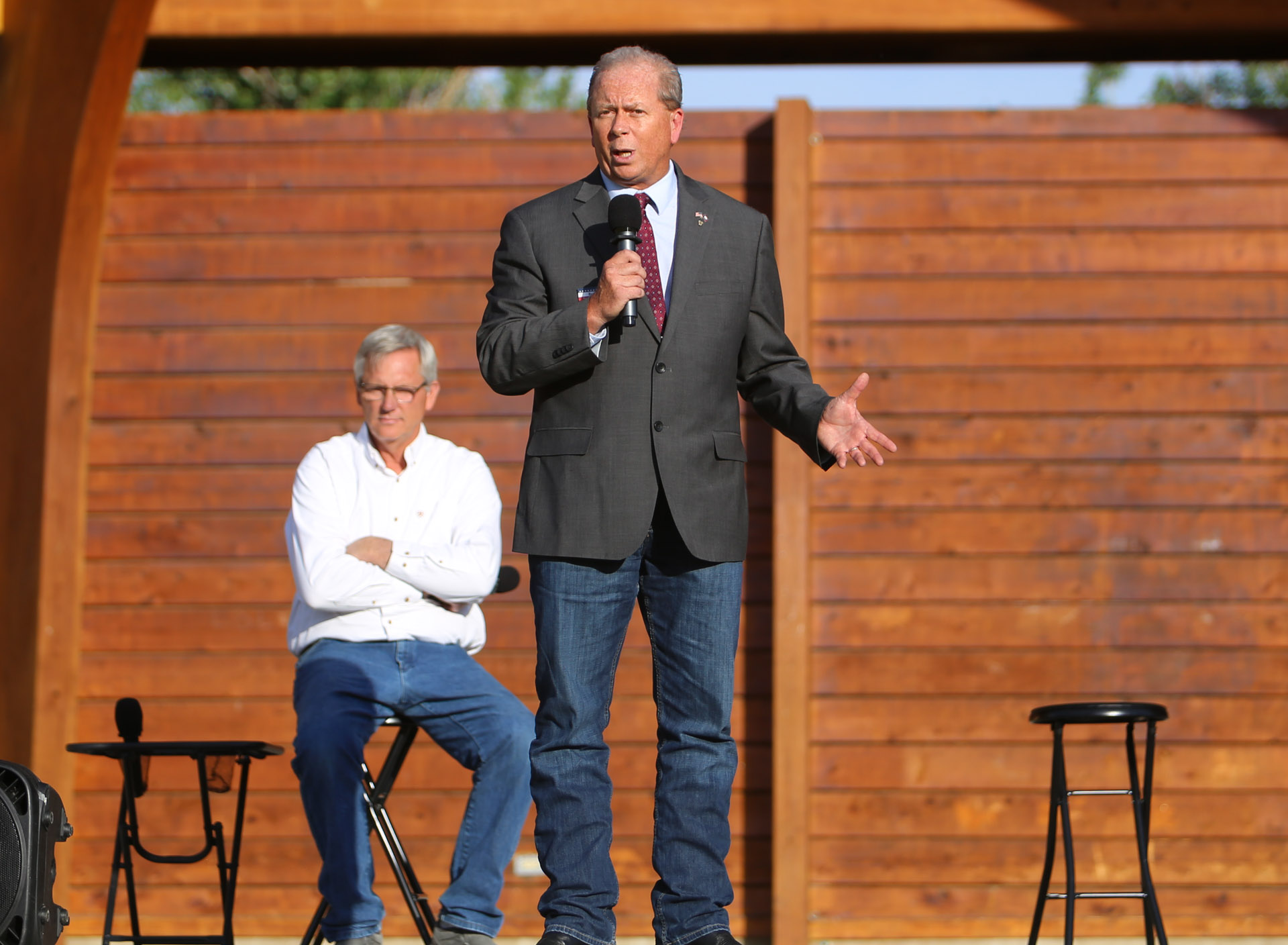 Gubernatorial candidate Brent Bien discusses his platform while opponent Rex Rammell listens at the Republican Politics in the Park event at the Lion’s Park Amphitheater in Cheyenne on Wednesday. (Lisa Hushbeck/Cap City News)

CHEYENNE, Wyo. — Governor candidates debated about how to make Wyoming more self-reliant at the Politics in the Park event Wednesday night.

This was the second of five events this summer where candidates running in the primary elections are able to talk about their positions on various issues that are important to the people of Wyoming. U.S. House candidate Harriet Hageman was a featured speaker in the first forum on June 20.

Rex Rammell and Brent Bien are both running against Gov. Mark Gordon for a spot on the ticket as the Republican candidate.

Rammell came out swinging, saying he was going to make Wyoming rich by getting back the state’s natural resources from the federal land.

“I think the governor has authority that he could sign an executive order, and order the state police to walk the BLM and the forest service managers out of the state,” he said. “If we don’t do it, you’re not going to recognize America or Wyoming.”

“This is a historic point in time. I think we’re at a point where the second American Revolution [could occur]. I think that America is a powder keg,” he added. “If we can light this fuse, I think it’ll start a state’s rights revolution that will sweep the United States.”

Bien stated a need for Wyoming to return to its roots, leaving behind the “woke” literature he said is being spread today. “We need this state to have a strong governor so we can stand up and coalesce with these other states and say no.”

“I will tell you, I’m here because I’ve seen just what the lack of leadership with indecision [has done]. Anytime there’s a lack of leadership, mediocrity always follows,” Bien said. “We have to remember that the states created the federal government, not the other way around.”

Along with the governor’s candidates, incumbent treasurer Curtis E. Meier came to speak on why he should continue to be the state’s treasurer.

“It is a team effort at the State Treasurer’s Office,” Meier said. “I’d appreciate the ability to work for another four years because I think that I could do some work of the same level of expertise and the same level of actually amazing results now and in the future.”

Candidates for House District 10 and Senate District 31 also made appearances at Wednesday’s event.

Incumbent John Eklund and fellow candidate Lars Lone spoke on many issues important to the state, including the current executive order from President Joe Biden that would withhold federal money for school lunches to those schools that do not adopt a non-discrimination policy based on sexuality and gender identity.

“I think it’s become a local control for school boards,” said Eklund, with Lone strongly agreeing, adding, “Education is something in the Constitution that’s delegated to the States under the 10th amendment. So we can take control of that.”

Senate 31 candidates Evie Brennan and Janet Marschner were also questioned on various issues throughout the state, both of them holding strong views on the situation surrounding restrictions on drilling on federal land.

“I’m going to call President Biden and tell him to lift the restrictions,” Janet said, with Evie making similar remarks. “We need to try to reduce some of the red tape pushback on the federal government where we can so that we can extract the energy that we have here in Wyoming.”