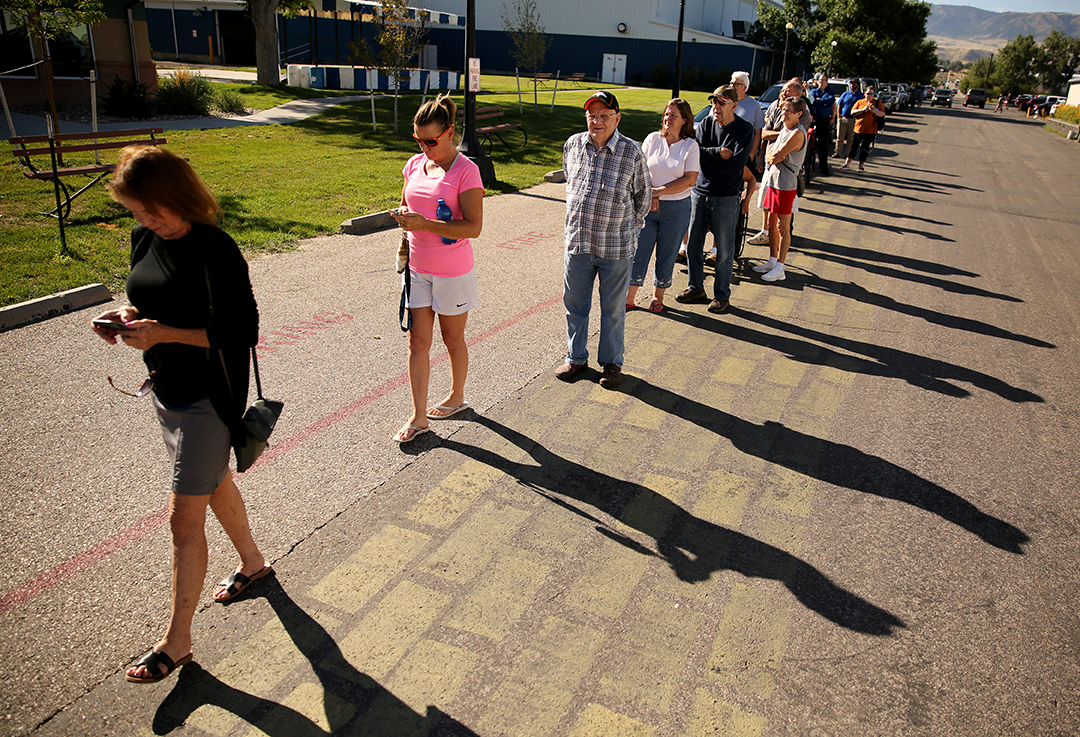 Long lines formed much of the day at the Industrial Building during the 2022 primary election on Aug. 16, in Casper. (Dan Cepeda, Oil City News)

Total number of ballots cast was the most in a primary election ever, with the highest rate of turnout in 28 years.

Moose resident Marian Meyers admitted that she didn’t do all of her homework ahead of showing up to the polls Tuesday at the Teton County Recreation Center.

Meyers, who had been in the books as a Democrat, changed her registration to Republican so she could vote for U.S. Rep. Liz Cheney, who she admired for having the “guts to stand up for our country in the face of a lot of opposition.” She was less certain, however, about which other Republicans on her ballot had values and stances that best aligned with her own — and so she left some bubbles unfilled.

“I did not want to vote for somebody who I was not familiar with and educated about,” Meyers said.

Meyers wasn’t alone — and it wasn’t just crossover voters who didn’t make it down the ballot.

There were more than 182,000 ballots cast across Wyoming during early and in-person voting, which is the highest raw count in a midterm primary election on record and the highest rate of turnout since 1994. Roughly 40% of Wyoming’s voting age population put a ballot in the mail or showed up to the polls. There was a 31% increase in Wyoming residents who voted compared to 2018, the last primary election halfway through a U.S. president’s term.

“To some degree, this was a referendum of where people stood on Trump, as much as anything else,” former Gov. Dave Freudenthal told WyoFile.

Largely, Wyoming voters motivated to come out sided with Trump in the highest-profile race: Cheney versus Harriet Hageman, the former president’s hand-picked proxy, who topped the incumbent by a 37% margin.

More than 99.5% of the nearly 172,000 ballots cast in the Republican primary marked either Cheney, Hageman or another candidate. Not so for candidates in races farther down the ballot. It’s nothing new, but there were several races — statewide, legislative, county, municipal, and others —  in which a significant portion of voters didn’t select a candidate.

In the competitive statewide race for the superintendent of public instruction, there were more than 25,000 fewer votes cast — called undervotes — than there were total ballots submitted. That’s about 14% of all the voters who turned out, and in that race Megan Degenfelder topped incumbent appointed superintendent Brian Schroeder by a relatively slim margin, only 3,555 votes.

Notably, the undervote rate for the superintendent of public instruction improved compared to the 2018 primary, when 21% of Republicans didn’t select a superintendent candidate.

There were 14,000 undervotes in the race for secretary of state, a position that oversees Wyoming’s elections. Rep. Chuck Gray (R-Casper), who campaigned on the premise that the 2020 election was rigged, won with 75,938 votes. Second-place finisher, Sen. Tara Nethercott, garnered 63,044 votes. Still, the undervote very likely played no role in the outcome — it would only have swung the race to Nethercott if more than 90% of the would-be voters filled her bubble.

But undervotes might have played a role in the outcomes of some Wyoming Legislature races. In Albany County’s House District 14, Julie McCallister lost by just 125 votes to Bryan Shuster in a race with 487 fewer votes placed than total ballots cast in the district. Albany County houses Laramie, a liberal-for-Wyoming city where voters were more apt to crossover. Based on who donated to the candidates — far-right mega-donors Dan and Carleen Brophy backed Shuster — a higher percentage of down-ballot voting might have swung the race to McCallister.

Cheyenne resident Jeff Oliver is an example of a Wyoming voter who weighed in on statewide races the primary, but didn’t vote all the way down the ballot. Usually a Democrat, his disapproval of Trump and the former president’s endorsed candidates motivated him to change party affiliation.

“With the age of Trump, democracy is in peril,” Oliver said.

Oliver voted against three Trump picks: Hageman, Schroeder and Gray. He didn’t vote on state House or Senate races, and personally knew of five or six other people in his circle who did something similar.

“You know, in some of those races they’re either like a Republican that’s unopposed or they are like two or three Republicans, who pretty much are equally very hardcore conservative,” Oliver said. “So there’s not a viable one that I would see as much better than the other in terms of what they’re going to do for Wyoming.”

The general election, where Wyoming voters can choose between Republicans and often long-shot independents, Democrats, and minor-party candidates is Nov. 8.