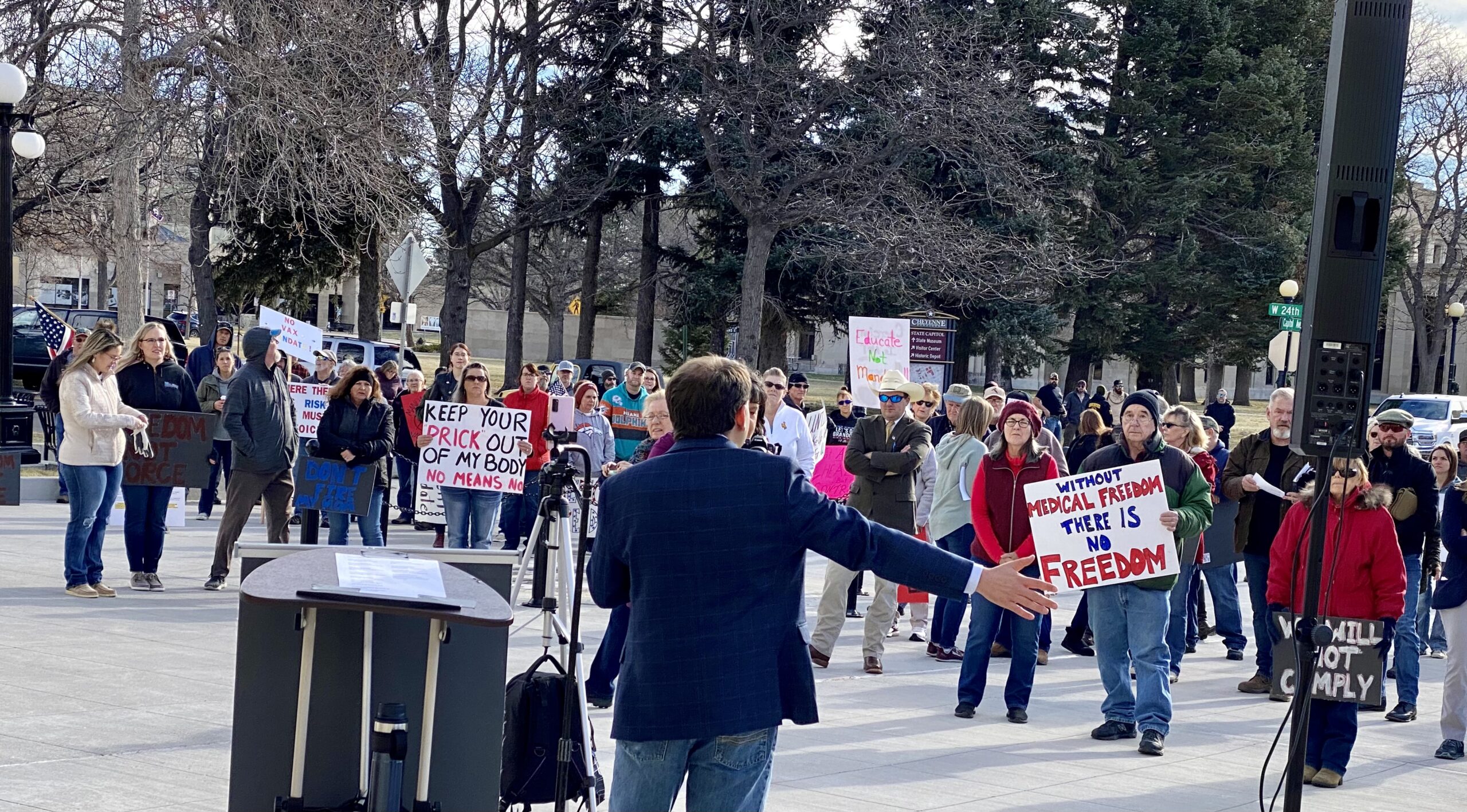 CHEYENNE, Wyo., – On Tuesday morning, an estimated crowd of around two hundred people gathered outside of the Capitol Building in Cheyenne, Wyoming to oppose what event organizers call the “unconstitutional overreach of the Biden Covid-19 mandate.”

The Medical Freedom Rally is scheduled to run from 10 AM through 2 PM and was organized by Wyoming Campaign for Liberty, ReOpen Wyoming and Wyoming Health Freedom.

Event organizers say that the following people are scheduled to speak throughout the day:

At the beginning of the rally, Natrona County Republican Representative Chuck Grey called out Wyoming Governor Gordon on his response to COVID-19.

“The only thing that he (Gordon) has taken action is liberal stuff. Shutting us down. That is the only thing he has done decisively in this gubernatorial office,” Gray said to the crowd. “It is all talk. No action.”

Gray spoke on the criticism of the special legislative session has received saying that “It’s not a waste of time – ever – to stand up for what is right. “We had some good bills. The bills they ended up referring to committee. We amended them to make clear that religious exemptions were going to be accepted no matter what, he went on to say.

Gray stated that he recently learned at a Converse County Rally that Banner Health and other medical facilities were going to be putting a cap on the number of religious exemptions they were going to grant. He alleged that in Casper, medical exemptions have been denied for pregnant women.

“This is sadistic,” Gray said.

Kathyrn Scigliano a founder of the group, “Moms for Liberty” addressed the audience warning that she was concerned that Biden’s vaccine mandate would eventually find its way into Laramie County School District #1.

“The reason why we are here, helping support medical freedom is if they can get to the medical side of this and to the health care workers than it is going to trickle down to our schools,” Scigliano stated.

She said that the schools don’t have the right to vaccinate their children without consent.

“Vaccinations should not be happening in schools,” Scigliano added.

The rally comes the day after a federal judge on Monday issued a preliminary injunction halting the enforcement in Wyoming and nine other states of a rule from the Centers for Medicare and Medicaid Services mandating healthcare workers get vaccinated against COVID-19.

On Monday, Wyoming Governor Mark Gordon lauded the Biden Mandate pause as a win for rural Wyoming healthcare facilities as they continue to face issues related to staffing.

“This is welcome news for Wyoming’s rural healthcare facilities, which are already facing staffing challenges without additional unconstitutional burdens being placed on their employees by the federal government,” Gordon said in Monday’s press release from his office. “Healthcare employees should not be forced to choose between vaccination and termination.”

The Wyoming Department of Health provides COVID-19 case, variant, death, testing, hospital and vaccine data online. The department also shares information about how the data can be interpreted. COVID-19 safety recommendations are available from the CDC.