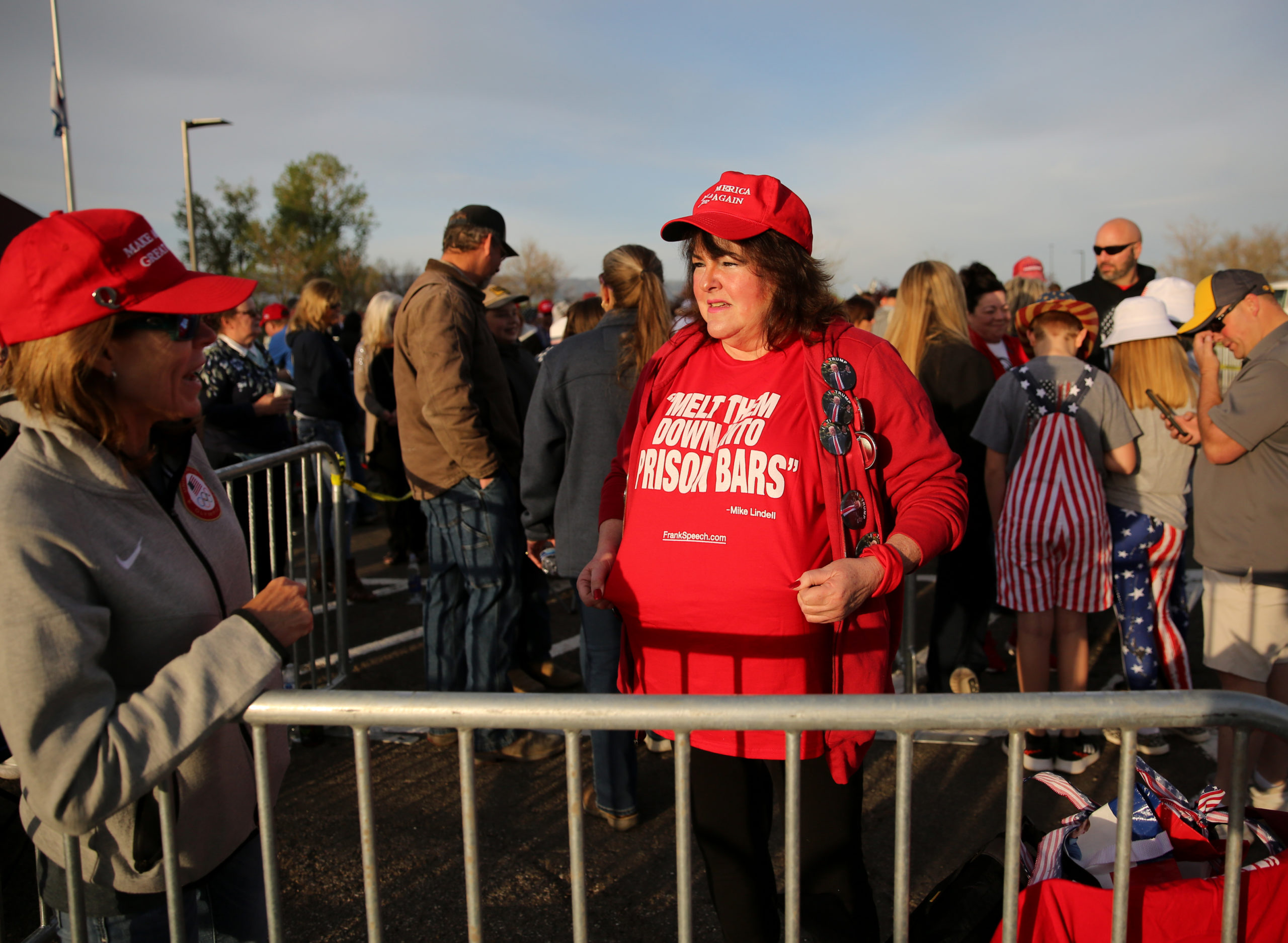 Holly Cleeland, from Burbank, Calif., talks with another Trump fan while waiting in line for the "Save America" rally on Saturday, May 28, 2022, at the Ford Wyoming Center. (Dan Cepeda, Oil City News)

Clutching a plastic bag filled with custom buttons with one hand, he handled cash from eager customers with the other. “Gotta sell something; these trips get expensive,” he said. The buttons were printed with a photo of former president Donald Trump, along with the date and place.

Dozens of faithful fans were lined up before the sun rose for Trump’s “Save America” rally, hours before gates were to open. Some drove more than 200 miles in the wee hours, others camped in the arena’s parking lot, and some just drove up from their Casper home. All wanted the same experience: A Donald Trump rally.

For Boatman, today’s will be his 37th rally, his 18th in a row, in the 20th state he’s visited. He’s living in a minivan he rented after flying into Denver on Tuesday. He drove to Yellowstone this week, but mostly stayed put in Casper. “It’s a beautiful country,” he said.

Boatman is a member of the “Front Row Joes,” a collective of Trump superfans who stay connected online, attend every rally possible, and get there early enough to have first dibs on front-row seats.

“This is my 48th Trump rally,” said fellow “Joe” Jonathan Riches, who arrived from Tampa, Florida, earlier this week.

“We just wait for the Donald Trump schedule to come out, and then we plot and make a plan right up to the location,” he said. “We’ve been out here for days, camping and celebrating and meeting all of our MAGA family.”

Casper resident Deborah Yates spent the night in camping chairs and holding blankets with her husband, daughter and a friend. A campout wasn’t in the plan until she drove around the area yesterday afternoon.

“I drove by and I saw that people were already getting in line and I started getting more nervous,” she said.

Her mother drove from Manville, Wyoming, and stayed back at her daughter’s house until meeting up this morning.

“We stayed the night to save our spots, because I wasn’t going to make my 78-year-old mother sit out here all night,” Deborah said. “I was gonna make sure she got in, because she loves Trump just like we all do.”

Tyler and Tammy Richardson got in their car at 1 a.m. to make the drive up from Cheyenne. “We wanted to get here early and make sure we got a good spot,” Tammy said. They brought snacks and two cheap “throwaway” camping chairs, knowing that security was sure to block their entrance.

They plan on driving back tonight after the rally, even after such a long day. “Why spend $80 when someone else can use the room?” Tyler said.