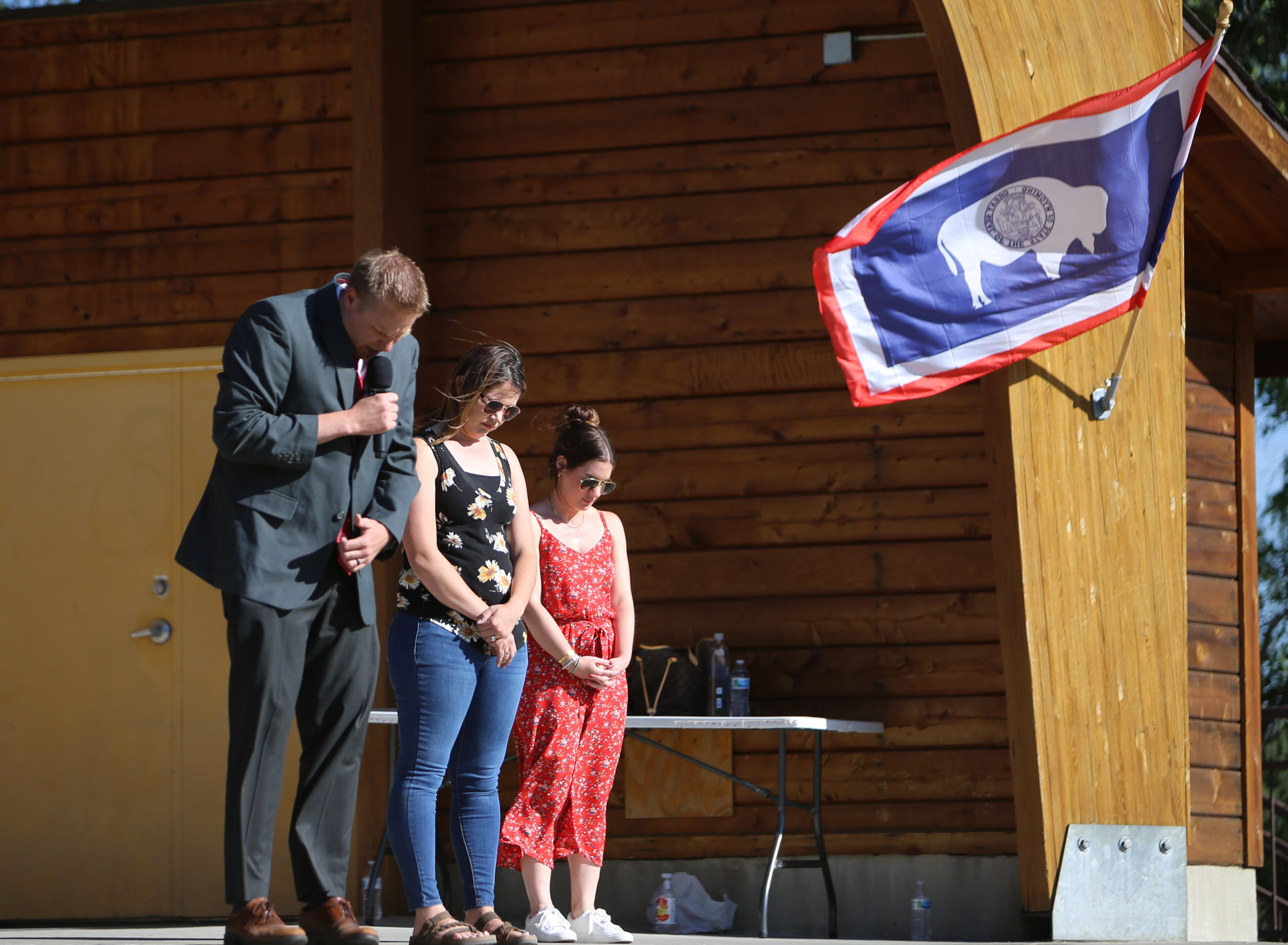 Dean Petersen, candidate for House District 09, gives the invocation at the first annual Republican Politics in the Park at the Lion’s Park Amphitheater in Cheyenne on Monday night. (Lisa Hushbeck/Cap City News)

CHEYENNE, Wyo. — People flocked to Lions Park to listen to the last Politics in the Park event of the summer.

This final event hosted the candidates who are running for County Commissioner, District Attorney, and House District 42.

Each candidate has their own diverse goals which they hope to achieve if elected. Thompson said, “Number one goal is to continue to have Laramie County be the best place in the world to live. I mean, there’s a reason that we raise our kids here. There’s a reason we have our small businesses here. So my number one goal is to continue to take part in making Laramie County the best that it could absolutely possibly be.”

Malam had similar sentiments, hoping to make the community be better through the sixth penny project. “Goal number one is to complete our sixpenny projects that voters chose to invest in our community with on time and on budget,” Malam said. “I think that’s a really big hurdle that we need to accomplish, especially given inflation.”

Heath said her main goal would be to listen to the people, saying “You go to the boots on the ground, you know what’s happening out there.” Mildenberger had a focus on looking into the land use regulations. “That’s one of my biggest concerns,” she continued, “It’s what got me started in the race and make sure that I said our growth is sustainable and protect the people who are already here while allowing for growth in a sustainable way.”

Finally, Freeman’s primary goal was to make government more transparent, saying “I want your government, your learning county government to be not only accessible to you, but inviting and that’s going to take some fixes to make it transparent and accountable to you.”

Sylvia Hackl and Thomas Callison came forward to speak about why they should be considered for District Attorney.

Hackl had similar goals, saying her first goal is to fully staff the office. “The office is currently budgeted for 22 staff members,” she said. “My understanding is they have 10 and you cannot do a good job even with the best people.”

“My second priority is to make sure that there is a supportive environment for the staff and one with open communication not only with the staff but with those who work with on a daily basis,” Hackl continued. “And my third priority is to be an effective officer. You can’t prosecute crime if you don’t work together as a team.”

House District 42 candidates were Linnaea Sutphin and Ben Hornok, both of whom had goal-oriented ideas for what they would want to do if elected.

Sutphin said of her goals, “My three top priorities are taxes and our economy, education and the Second Amendment.” Hornok had similar goals, focusing primarily on property taxes, saying, “We’ve got an issue with property taxes. We’ve got an issue coming up that I’m sure we will deal with very soon, trying to get a state income tax. I’m against those taxes and I’ll fight hard to keep that stuff out of Wyoming.”