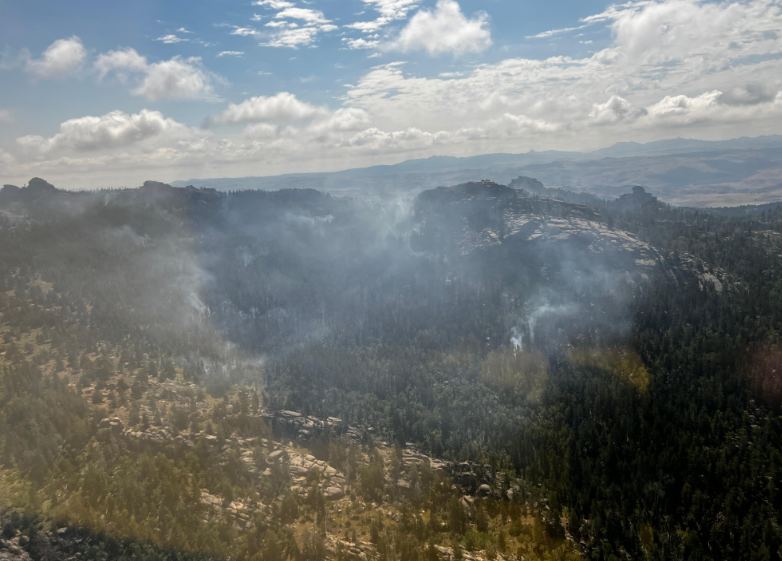 Rain limited activity on the Sugarloaf Fire on Wednesday and Thursday. (USFS via InciWeb)

CHEYENNE, Wyo. — Rain fell in the area of the Sugarloaf Fire in the Medicine Bow National Forest on Wednesday and Thursday, limiting activity and spread of the fire, a Friday morning update from fire managers said. The fire saw 0.05–0.15 inches in the 24 hours preceding the update.

With scattered showers and thunderstorms and higher humidity levels expected on Friday, the fire is expected to experience only limited spread until a change in the weather occurs, the update added. While the precipitation is expected to limit fire activity with brief heavy rainfall, “dangerous lightning” is also possible.

The 512-acre fire remains at 0% containment and an evacuation notice remains in place for Bear Creek Road between the Garrett intersection and Friend Park. A pre-evacuation notice is in effect for Friend Park and the Fetterman-to-Garrett Ranch area, the update posted to InciWeb said. A shelter in Rock River set up by the American Red Cross has been closed.

A variety of air resources as well as 304 personnel are assigned to the fire, and while it officially remains 0% contained, crews were able to strengthen handline on the north end between Cow Creek and the eastern edge of the perimeter on Thursday, fire managers said. Firefighters will work to extend an indirect line from the northeast corner of the fire area to an existing two-track road to the fire’s east on Friday.

“Along the west side, the fire continues to creep and back downslope,” the update said. “Crews are working to improve areas along Cow Creek to take advantage of the transition from timber to lighter, green fuels along the creek. These improvements could assist in slowing fire spread and reducing fire intensity, if it reaches the bottom of the drainage.”

“Bulldozers have completed improving the existing two-track road on the east side of the fire and will continue working along the road to the south and west. Additional fire personnel continue to scout for additional opportunities to develop containment lines along the southern end of the fire.”

There is a temporary flight restriction in effect over the fire area that applies to aircraft and drones that don’t have special permission.

“Please remember: If you fly, we can’t!” the update said.

There are also Stage 1 Fire Restrictions in effect for the Medicine Bow-Routt National Forests and the Thunder Basin National Grassland, with more information available from the U.S. Forest Service.

The fire was initially discovered on Monday about seven miles southwest of Laramie Peak. It is suspected to have been human-caused.

“Anyone with information on how the fire started can call the Forest Service Law Enforcement Tip Line, 303-275-5266,” fire managers said.

The Rocky Mountain Complex Incident Management Team Three is in command of response to the fire.