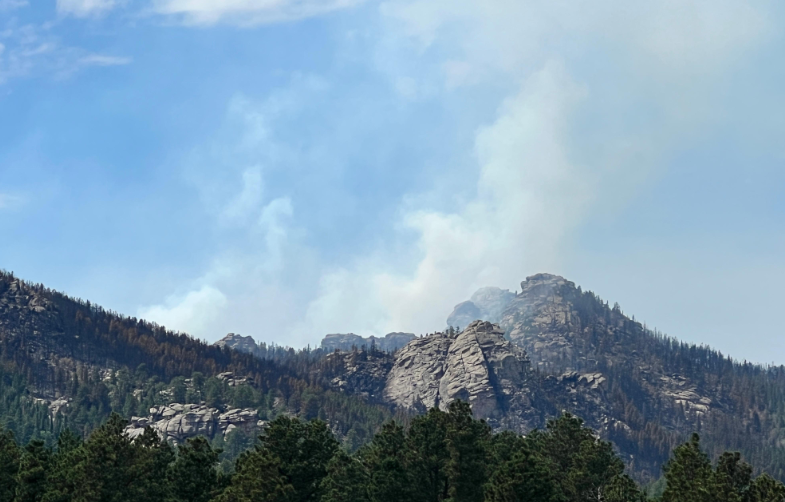 Containment on the fire has grown to about 19% since its discovery on Monday, July 25. A variety of aircraft and 418 personnel are assigned to the fire. Evacuations remain in place for Bear Creek Road between the Garrett intersection and Friend Park, and a pre-evacuation is in effect for Friend Park and Fetterman to Garrett Ranch.

“If you are evacuating the Sugarloaf Fire area and need assistance with temporary housing, please contact Albany County Emergency Management at 307-721-1815 or 307-721-1896,” Monday’s release said.

Those firing operations are intended to help complete indirect fire line and could lead to an increase in smoke that could be visible from far away, the update said.

“Firing operations are conducted to introduce lower-intensity fire under specific conditions,” the incident management team said. “Low-intensity fire is less damaging to the land and allows firefighters to strengthen containment along the perimeter by reducing the amount of vegetation available to burn. Weather conditions, such as humidity levels and winds, and the availability of qualified personnel to coordinate the firing are two factors that determine if these operations can be undertaken. If any of the required conditions cannot be met, firing operations will not occur.”

“If weather and terrain conditions allow, they will hike into those areas and take suppression action using a combination of hand tools and aerial water drops,” the update said. “These efforts are to reduce the fire spread to the east and the potential for firing operations on the east side of the fire. An indirect fire line has been completed; the search for alternate indirect lines closer to the active fire perimeter continues today.”

Warm and breezy conditions on Monday could lead to moderate fire activity with backing and single-tree torching activity possible. Some afternoon thunderstorms are possible and could produce brief heavy rain, small hail and gusty outflow winds of 35–40 mph. “Dangerous” cloud-to-ground lightning could also occur in thunderstorms, the update added.

A cold front is expected to arrive by late Tuesday, potentially bringing more moisture to the area.

There are Stage 1 Fire Restrictions in effect for the Laramie Peak unit of the Medicine Bow-Routt National Forests and the Thunder Basin National Grassland, the update added.

A temporary flight restriction remains in effect for any aircraft that doesn’t have special permission to enter the area.

“Please remember: If you fly, we can’t!” the update said.

The fire is suspected to have been human-caused.

“Anyone with information on how the fire started can call the Forest Service Law Enforcement Tip Line, 303-275-5266,” the InciWeb page for the Sugarloaf Fire says.

Further information on the fire is available via InciWeb.