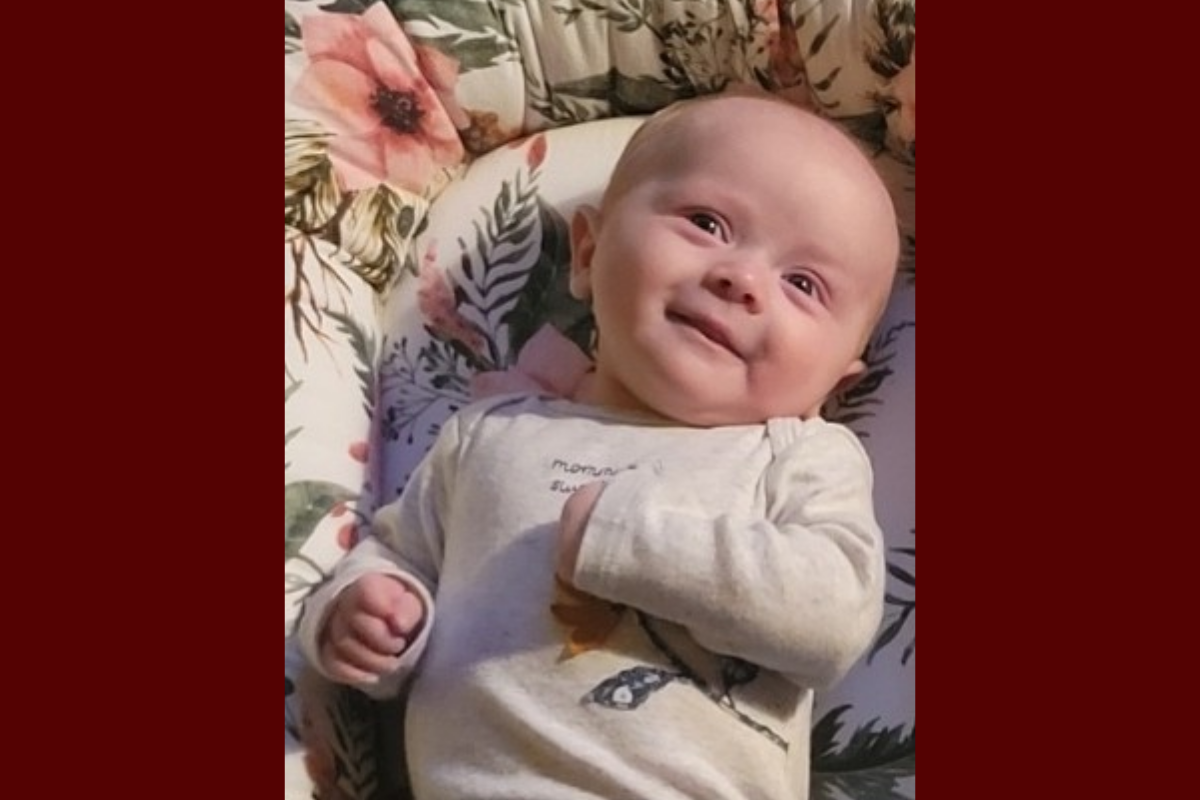 Allysandra was born December 12, 2021 at UCHealth in Aurora, Colorado and was transported straight to Children’s Hospital. From there she stayed in the NICU for two weeks and underwent many surgeries and procedures but yet was always a smiling baby. At that time, she was diagnosed with a very rare type of tumor and began chemotherapy to help fight this terrible disease.

Allysandra went by so many names. Her nickname was “Ally”, but there was also “Little Miss”, “Little One”, and “Little Monster”. She had both of her parents wrapped around her finger from day one. She was her mother’s “mini me”. She had red hair, blue eyes and of course we can’t leave out the sassiness. But if anyone knows her father, she had his smile from day one. She loved to fly high in his arms being super baby and loved going on walks to see the horses. Bath time was always fun until it was time to get out. She loved watching television even when the screen was behind her. She would do anything to watch it even upside down. Dinner time was her favorite time to get sassy so her mom and dad couldn’t eat without her. Bedtime was always a challenge for her. It didn’t matter if her arms were swaddled or not, they were always causing problems. She would fight all night to get them out just to have them keep her up.

Ally spent a lot of time in the hospital having chemotherapy treatments and surgery. But during these difficult times, she met so many different people that were kind, caring, and loving to her. She was something of a hospital celebrity, Everyone in the hospital knew the adorable redheaded baby who loved to smile. Doctors and nurses who weren’t even assigned to her would come and just say hi. She was even taken by a doctor or two to check on other patients as an honorary doctor. It didn’t matter where Miss Ally was, she caught everyone’s eye and touched so many hearts that everyone remembered her.

Ally wasn’t just a hospital celebrity but also one at her dad’s work. Even though she only came to work once and two people met her. There weren’t many who didn’t know about Miss Ally. She had her own fan club everywhere she went, and whenever she had a treatment or surgery, she was the first thing anyone asked about.

While her time with us was short, and her adventures limited to very few places, she left a lasting impression on everyone. The story of Ally may be finished here on earth but will continue on forever in our hearts.

A visitation will be held on Friday, April 29, 2022 from 5:00 p.m. to 7:00 p.m. at the Schrader, Aragon and Jacoby Funeral Home.  A celebration of Allysandra’s life will be held on Saturday, April 30th at 2:00 p.m. at the Lakeview Chapel at Schrader, Aragon and Jacoby Funeral Home with a reception to immediately follow in the Schrader Reception Center.

Richard Ellis Stone, went to his heavenly home on April 26th, with his son, Jeff, daughter-in-law, Jahna, and granddaughter, Mckenzie by his side. He was born to Vincent L. and Ruth D. Stone, on April 25th, 1936, in Lingle, Wyoming. He was an only child. He was raised around and spent many summers with his first cousins, which he stayed closed to throughout his life. Family was always important to him. He was preceded in death by his parents, Vincent and Ruth, and wife, Karen D. Stone.

Richard was a graduate of Cheyenne Central High. After attending Casper College, where he met and married Karen D. Ophiem, they moved to Cheyenne. Where they raised three children, Debra Ann, Timothy Richard and Jeffrey Jo.

In his youth dad, worked on a harvest crew in Oklahoma, and a dude ranch in Central City, Colorado. After his marriage to Karen, he worked a year for the State of Wyoming at the check station. And then he found his true passion, carpentry. He joined the Carpenter’s Union, obtaining his apprenticeship and went to work and loving his work all of his life until about 5 years prior to his death.

Richard also loved hunting, and rodeos, he drove his kids countless miles for many years to Jr. Rodeos around the country. He joined the Cheyenne Frontier Days Committee in the early 80’s where he started out at chute 9 and then worked with Doc Swanson with the injured animals. His last years were spent at the Contestants Committee. He loved the work days and all of his friends at Frontier Park.

Richard spent his last few years at Aspen Winds, where he received excellent care and love while there.

Richard is survived by his 3 children, Debra and Stan Rogers, Tim and Laurie Stone, Jeff and Jahna Stone; 10 grandchildren and 14 great-grandchildren. He loved his family and made a great effort to attend all the grandkids activities.

Services will be held Monday, May 2, 2022 at Lakeview Chapel at Schrader, Aragon and Jacoby Funeral Home. Following services, interment will be held at Memorial Gardens in Cheyenne. A reception will follow at the Cheyenne Frontier Days Event Center at 1:00 p.m.

In lieu of flowers please send donations to the Cowboy Crisis Fund.

Services are under the care of Schrader, Aragon and Jacoby Funeral Home, 2222 Russell Avenue, Cheyenne, WY 82001.