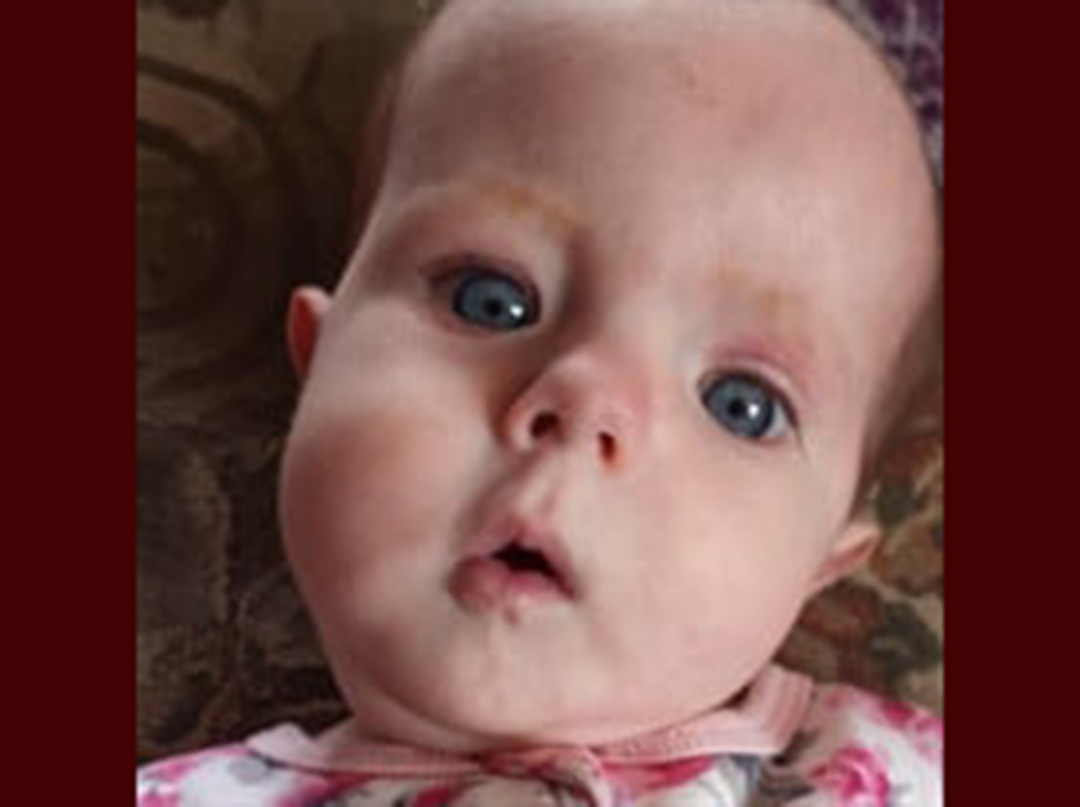 Cadence Hope Chilton, 10 months, passed away on Wednesday, June 1st, in Cheyenne.
Cadence is survived by her parents, Jim and Monica, her 12 siblings, a lovely sister-in-law, her grandparents, and various aunts, uncles and cousins.

Cadence was born at home, like her siblings. We knew before she was born that her life would be very short, but, true to being a Chilton, she had unknown strength in her tiny body. God had plans for her. While her family waited for her to pass in the first hours, then days, she clung to life. God graced us with 10 wonderful months with her, full of half smiles and bright eyes.

God knew Cadence would be small, and need special guardians, so she was born on her brother Josiah’s birthday, and passed away on her sister Aria’s birthday. She was never alone. All her siblings enjoyed carrying her, playing with her, sharing all their love with her, so much so that Mom and Dad sometimes had to tell them to stop, so they could cuddle her.

Cadence was loved by so many. Her family, her church family, and countless internet “aunts” and friends across the world. Her life was shared in photos, prayer requests, and the occasional video. Cadence exemplified love and life in a tiny package.

As we learn to live with Cadence gone, we all rejoice in the solid knowledge that we will see her again one day. Cadence dances and sings in the presence of God now. She is hugging her grandparents and more who have gone on before. We thank God for His free gift of salvation through Jesus, and the assurance that when our time and journey is done, we will join Cadence, and she can show us around.

Jim Crawford, 85, of Cheyenne passed away January 20, 2022 at Granite Rehabilitation and Wellness.

Jim was born April 11, 1936 in Hayes KS to Charles and Jane Crawford. He went to school in La Porte, Colorado and graduated from Laramie, Wyoming High School. He and his brother Ed joined the U.S. Navy in 1956. They both went to Boot Camp in San Diego, California. He went to Machinist Mate School, at Great Lakes, Illinois. He and Ed were stationed on the USS Randolph, a CVA-15 Carrier Attack Ship. That ship was a World War II ship, which became an CVSAnti- Submarine

He met and married the love of his life, Phyllis, in 1957. They had a daughter,  Kristi and a son, Kraig. While in the Navy they lived in Portsmouth, Virginia. He and Phyllis joined our Cheyenne First Christian Church in 1961

After leaving the military, Jim worked as a contractor in Laramie. He also worked in Hanna for the Railroad. From 1961 until 1998 Jim worked for The Wyoming Highway Department, retiring with 39 years of service. Phyllis passed away in 1993. In 1967 Jim joined the US Navy Seabee RMCV-15 and remained there until 1977. In 1978 through 1987 Jim served in the Wyoming National Guard. From 1987 until 1996 he was with The National Guard Reserve. He had a total of 35 years, 1 month and 1 day of military service.

Jim is survived by his children, Kristi Crawford-Peake of Cheyenne and Kraig (Ginger) Crawford of Cheyenne; brother, Edward Crawford of Timnath, CO and 3 grandchildren, Zach (Hollis) Crawford, Savannah (Corey) Olson and Jasmine Peake; and two great-grandchildren, Parker and Grant Olson. He is very proud of all of them.

He was preceded in death by his parents; wife, Phyllis Crawford and a brother, Charles.

Those who wish may contribute in Jim’s name to the American Cancer Society or to the First Christian Church Outreach Society in memory of his wife, Phyllis.

Graveside services are Saturday, June 11, 2022 at Beth El Cemtery with a reception to follow in the Schrader Reception Center.

The family would like to thank the wonderful care he received at Granite Rehab Center and Fresenius Kidney care Center.