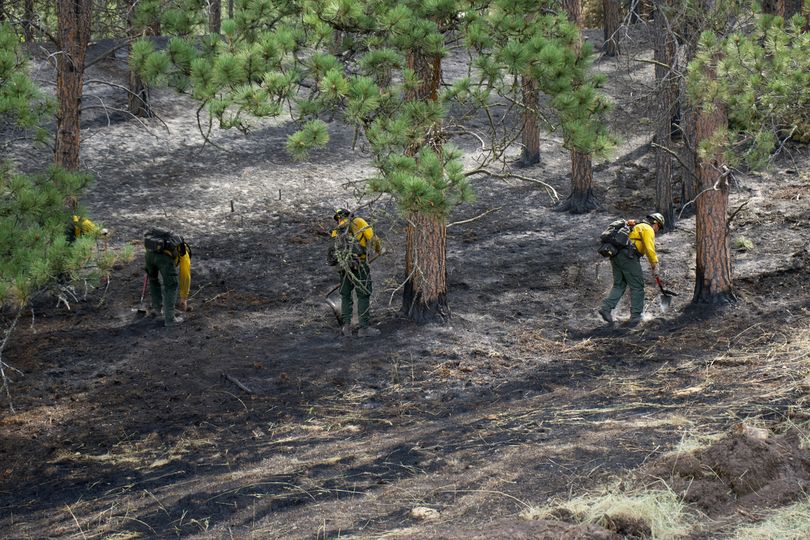 “The Rocky Mountain Team appreciates the community’s support throughout the last week,” Rocky Mountain Complex Incident Management Team 1 wrote in a release Sunday morning. The team found success by continuing its tactics from the last few days securing the fire’s perimeter: this included “securing firelines, patrolling, and mopping up heat sources close to the fireline.”

Firefighters were also further assisted by some predicted late-afternoon and nighttime thunderstorms Saturday, which dropped rain onto some areas of the fire.

“Today, firefighters will begin work with extra caution and attentiveness to additional fireline and roadway hazards due to last night’s rain,” the release stated. While one division will work to secure the last of the fireline, others will continue suppression repair, which prevents soil erosion and water channeling and helps restore plant growth.”

Additionally, backhauling will begin Sunday. According to the release, “Backhauling is the process of removing equipment no longer needed from the fire area. Generators, hoses and pumps, and portable water tanks are then reconditioned and made available for use on other fires.”

The fire is still 6793 acres in size and has a total of 443 personnel attending to it. Though evacuations have been lifted, an area closure is still in place within Black Hills National Forest, and the area is a no-fly zone for unauthorized aircraft, including drones.

Sunday will be the last shift of the Rocky Mountain Complex Incident Management Team Type 1, which is led by Incident Commander Dan Dallas. At 7 a.m. Monday, command will be transferred to the Wyoming State Type 3 Incident Management Team 3, led by Incident Commander Timothy Sherwin. Personnel from the latter team will be at the site shadowing the former team Sunday, allowing them to implement a smoother transition.

On Saturday and Sunday, the fire’s informational Facebook page provided explanations of a few commonly used terms surrounding wildfires. One post described what responders mean when they reference fire containment.

“‘Containment’ indicates how much of the fire perimeter has been surrounded by a control line that the fire will not progress across,” the post stated. “Rather than describing how much of the entire fire has been put out, containment refers solely to the perimeter itself and its potential for growth.”

Another post detailed the meaning of the phrase “mopping up,” which is the second part of containment after active suppression. “Mopping up makes a fire safer by extinguishing or removing burning and hazardous material within or close to the fire’s edge,” responders wrote. “Mop-up is hard, dirty, and tedious work that includes looking for smokes or hot spots in what otherwise looks like a cold area, and then extinguishing them.”