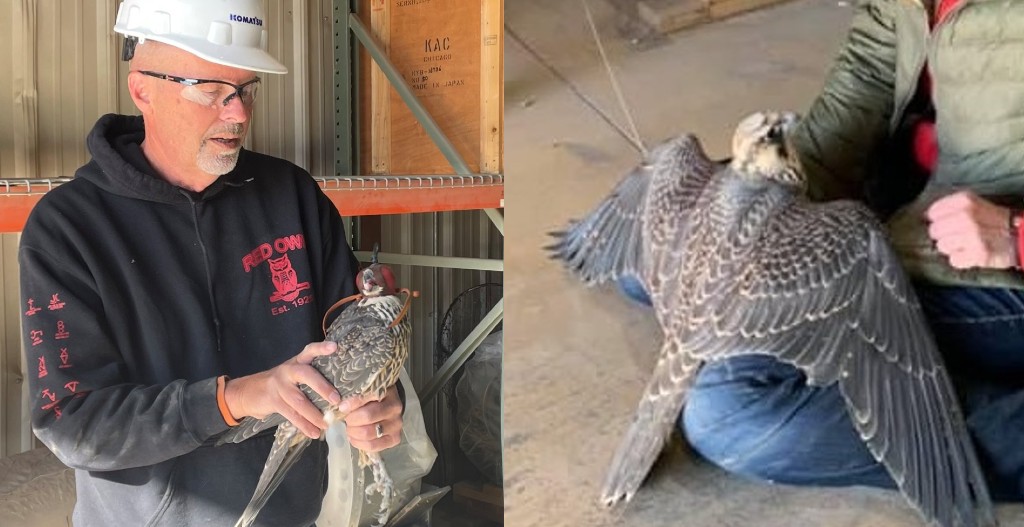 John Lindstrom, a licensed falconer based in Spearfish, South Dakota, assisted with the rescue of the peregrine falcon. (Erika Peckam, Wyoming Game and Fish)

CASPER, Wyo. — On Monday, a wildlife biologist with the Wyoming Game and Fish Department shared the story of a peregrine falcon that was rescued after becoming trapped inside a warehouse in fall 2021, rehabilitated, and ultimately released back into the wild in May 2022.

Gillette Wildlife Biologist Erika Peckam was contacted by employees of Komatsu, who were concerned about a bird that had become trapped in the company’s warehouse, Peckham said in a news release shared by Game and Fish on Monday.

“When I responded to the call, I took a quick look and saw that it was a falcon, before retreating outside to make a plan,” Peckham wrote. “Komatsu employees had kept the large garage doors open for as long as they could, but due to the high ceilings and many shelves, the falcon was unable to see or find a way out of the building and had been trapped for at least a day.

“Komatsu staff were concerned for the welfare of the bird and were willing to allow access and cooperate in any way that they could to assist with getting the raptor out.”

Peckham said she contacted her friend Vanessa Bridges, whose father, John Lindstrom, is a licensed falconer in Spearfish, South Dakota.

“John dropped everything without question and headed immediately to Gillette with a plan in mind,” Peckham said. “When John arrived a couple hours later, he identified the bird as a Tundra peregrine falcon.”

The Tundra peregrine falcon is one of three subspecies in North America and nests in Arctic regions of Alaska, Canada and Greenland, Peckham said.

When Lindstrom and Bridges came to help, they brought a live pigeon and a harness and tether.

“The plan was to harness the pigeon and use it to lure the falcon in,” Peckham said. “After being harnessed, the pigeon did not fly far — just a short distance overhead of the Komatsu employees, who were waiting to assist as needed. The falcon did not hesitate for a second, and swooped overhead just feet above everyone.

“The few people present were treated to seeing just how fast and aerodynamic peregrines are, in a closeness that very few people ever get to see. The pigeon flew behind a shelving unit and the peregrine followed. I was then able to corner the peregrine between the shelves and a wall.”

The falcon was able to be captured and the pigeon used to lure it remained unharmed.

A physical assessment of the falcon found it was underweight and that migration would likely be difficult, Peckham said.

“John and I decided it would be best to overwinter the bird with a licensed bird rehabilitator,” she added.

After the winter, the falcon was released back into the wild in May 2022.

“Many thanks to John for sharing his time and years of knowledge, [to] Vanessa for assisting and to Komatsu employees for their concern and assistance,” Peckham said. “We also appreciate the significant work by the bird rehabilitator who fed and cared for the falcon daily to make this the success story that it was.”