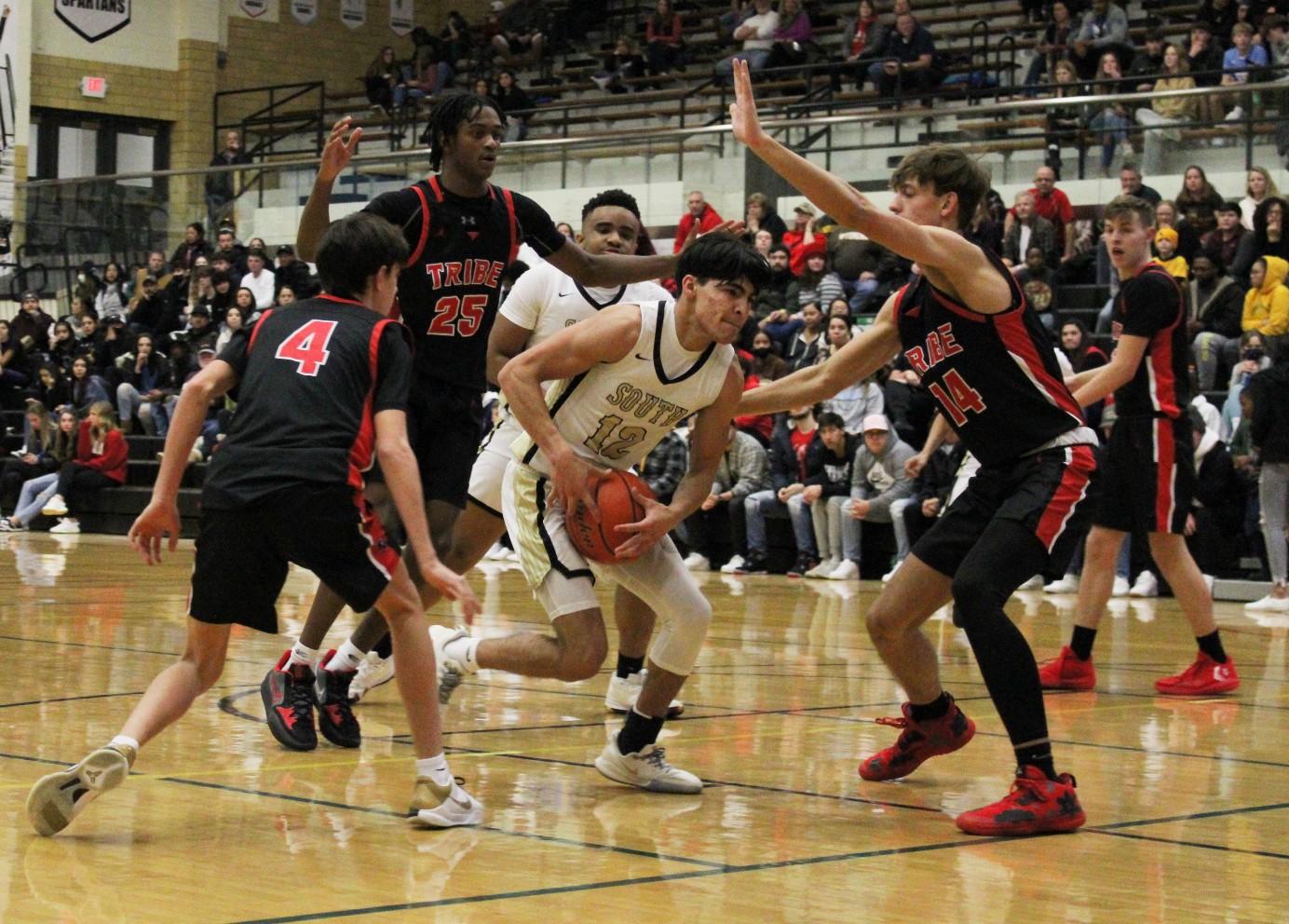 Cheyenne South boys basketball player Jeremiah Moyte (12) attempts to dribble through a crowd of Cheyenne Central defenders during the Bison's 63-60 win over the Indians earlier this year at Storey Gym in Cheyenne. The Bison will have a new coach next year in Chad DeBruyn, who replaced the outgoing Jeff Bailey. (Briar Napier/Cap City News)

CHEYENNE, Wyo. — There will be some new personnel within the South High School sports scene this fall.

South athletic director Mark Puev announced this week that the school had hired three new athletics coaches and noted that a separate coach had announced his retirement, leaving a new vacancy in the department.

DeBruyn, a social studies teacher at South since the school opened in 2011, was an assistant for two state championship teams at Central under former coach Tagg Lain, who retired this offseason. Employed in the district since 2004, DeBruyn formerly taught and coached in Yuma, Colorado before moving to Cheyenne.

Moyte, a 2013 South graduate that had been an assistant on the Bison cheer squad for the past nine seasons, has helped lead South to numerous state championships over that time frame as the school has emerged as a state powerhouse in the sport. South cheerleading most recently won the Wyoming High School Activities Association Class 4A Game Day state title at the State Spirit Competition in January in Casper.

Downs will be taking over the Bison dance program, bringing in 17 years of experience in ballet, modern, lyrical, improv, jazz, hip-hop, tap and aerial arts. Currently a teacher and choreographer at En Avant Dance Studio in Cheyenne, Downs will lead the charge on a South dance squad that’s made several state appearances over the past few years.

Steele had been involved with Bison athletics for seven seasons prior to his retirement, holding his track roles the entire way while additionally taking over the cross-country coaching role four years ago. A girls indoor track and field state champion with East in 2012, Steele later moved on to help build the South program while he was a special education teacher and speech pathologist in the district for a decade.

“Coach Steele has been an important part of South’s athletic culture while here,” Puev said in the release. “He has been willing to do virtually anything to help not only the athletes in his programs, but anywhere needed within the athletic department. He is a tremendous role model for the student-athletes at South High School and will always be appreciated for all his hard work and dedication.”