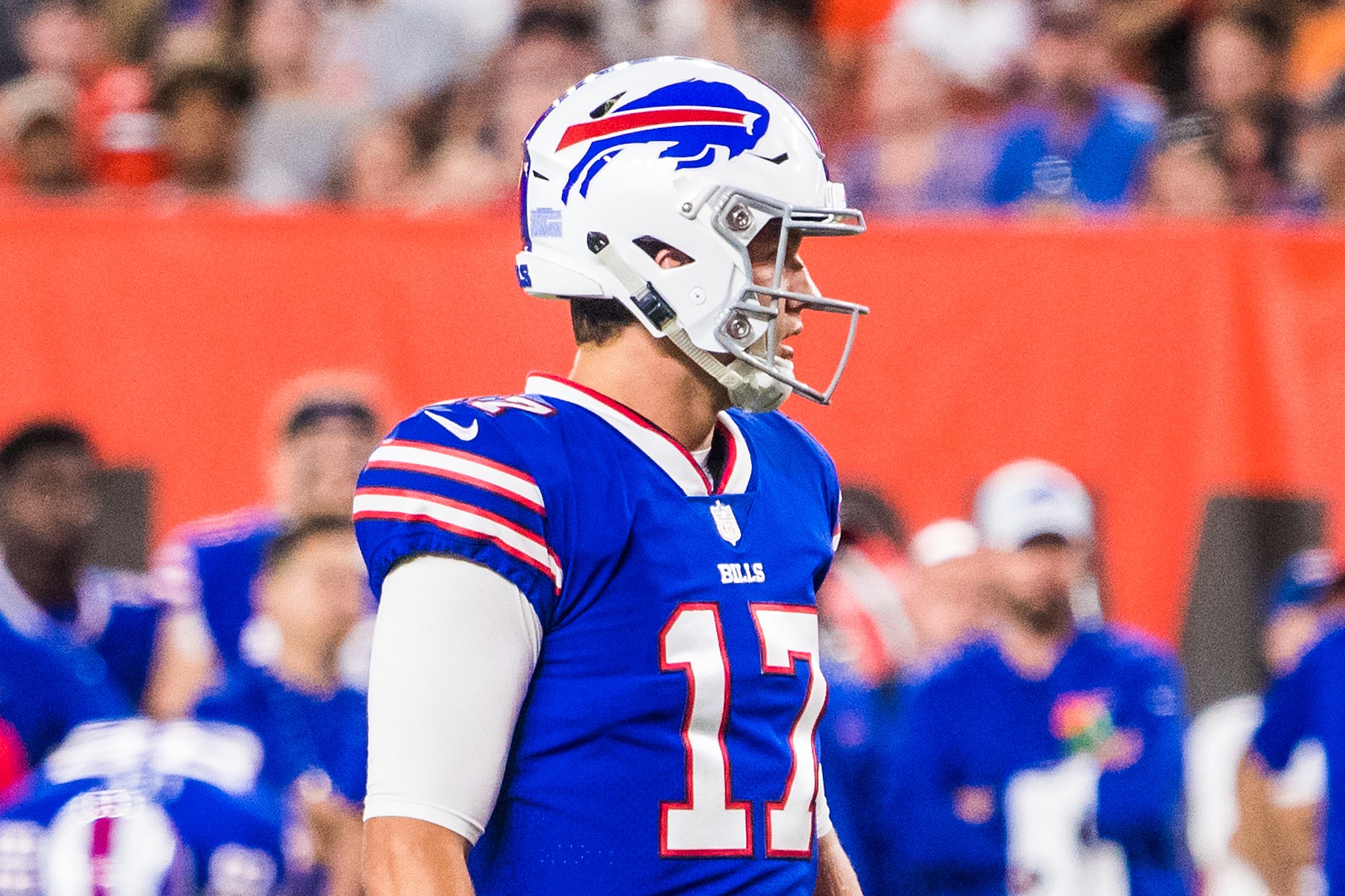 NOTE: The following players listed went to the University of Wyoming at some point in their college careers, played high school sports in the state, or both. For the NFL, only players currently on active rosters are listed.

It didn’t take long for Allen to get the gears turning again in the Bills’ offense during his preseason debut Saturday against the Denver Broncos.

The NFL MVP candidate played just one series, but he capped off a game-opening six-play, 70-yard drive by throwing a 28-yard touchdown to wide receiver Gabriel Davis. Allen’s day was done from there, finishing with 3-for-3 passing for 45 yards and the score in Buffalo’s 42–15 rout of Denver.

Veterans Case Keenum and Matt Barkley are still battling it out for the right to be Allen’s backup, though Keenum got the bulk of the work under center against the Broncos and had a strong 16-for-18 passing day with 192 yards and a touchdown. Barkley, by comparison, went 7-for-8 passing for 65 yards and no touchdown.

The Bills cap off their preseason schedule with an away game against the Carolina Panthers at 5 p.m. Friday.

The former Mustangs and Cowboys star is still waiting to make his 2022 debut as he continues his recovery from offseason shoulder surgery, sitting out Cincinnati’s 25–22 loss to the New York Giants on Sunday. Wilson is expected to be cleared to play in time for Cincinnati’s final preseason game Saturday — a Super Bowl rematch against the Los Angeles Rams — per reporting from CBS Sports.

However, the recovery process hasn’t stopped Wilson from having a little fun with the time off.

Wilson, who was an all-state punter back in his high school days in Casper, booted a field goal to close a Bengals practice Thursday and shorten Friday’s workout (as captured below by The Athletic’s Jay Morrison), much to the joy of his teammates.

Perhaps Cincinnati has now found its emergency replacement kicker if stud second-year player Evan McPherson goes down due to injury.

Muma, a third-round pick of Jacksonville in this year’s NFL Draft, recorded four total tackles as the Jaguars lost 16-15 to the Pittsburgh Steelers.

The Colorado native impressed in his limited time on the field, nearly pulling off a diving interception on Jacksonville’s first defensive series before officials ruled Muma to be out of bounds.

Jacksonville closes out its preseason with a matchup against the Atlanta Falcons at 1 p.m. Saturday.

Epps is likely poised for a starting role in the Eagles secondary following the offseason departure of a previous starter at safety, Rodney McLeod, who signed with the Indianapolis Colts.

The former Poke didn’t record any stats in Philly’s 21–20 win over the Cleveland Browns on Sunday.

Considering that the Packers will not play veteran starters during their preseason finale against the Kansas City Chiefs on Thursday, it likely means that Gafford — who is very much on the bubble to make the final roster cuts — will get an extended final chance to show what he can do on the field.

A former cornerback at UW that has spent his pro career being a receiver, Gafford returned one kickoff for 18 yards and made one tackle in Green Bay’s 20–10 win over the New Orleans Saints on Friday.

Rouiller made his return to the field Saturday for the first time since a fractured fibula ended his 2021 season prematurely, seeing some time on the offensive line in the Commanders’ 24–14 defeat to the Chiefs.

Looking more and more like he’s ready to go for Washington’s regular-season opener against Jacksonville on Sept. 11, Roullier could see additional action in the Commanders’ preseason finale against the Baltimore Ravens at 5 p.m. Saturday.

The former Pro Bowler, who spent last season with the Chicago Bears, signed a one-year deal with the 49ers on Monday as a bit of an insurance policy for starting safety Jimmie Ward, who is in danger of missing San Francisco’s regular-season opener against the Bears due to a hamstring injury.

Gipson, who turned 32 earlier this month, will suit up for his fifth pro team following prior stints with the Browns, Jaguars, Bears and Houston Texans. The upcoming season will be Gipson’s 11th in the NFL should he see regular-season action.

Wingard didn’t record any stats in Jacksonville’s loss to Pittsburgh on Saturday.

The former Cowboy should be a safe bet for the Jaguars’ final 53-man roster following a strong 88-tackle season in his third year as a pro in 2021.

Granderson tallied one tackle in New Orleans’s loss to Green Bay on Friday.

The former undrafted free agent signed a two-year extension to his contract with New Orleans, the only franchise he’s played for professionally, this past offseason.

Bryan recorded no stats in Cleveland’s loss to Philadelphia on Sunday.

A former first-round pick that signed with the Browns following four seasons with the Jaguars, Bryan, now 26, has seen some first-team reps with his new franchise and could be in the hunt for a starting role as the regular season approaches.

Purcell recorded no stats in Denver’s loss to Buffalo on Saturday.

Now 31, Purcell’s status as a continued member of the Broncos’ roster is up in the air as final cuts loom, with the Colorado native having joined the team in 2019 following a stint in the now-defunct Alliance of American Football.

Hollister recorded no stats in Vegas’s 15–13 win over the Miami Dolphins on Saturday.

Stuck behind at least Darren Waller and Foster Moreau at the tight end position on the Raiders’ depth chart, Hollister, 28, may see more work as a special teams piece this season.

Hall recorded two total tackles for the Rams in their 24–20 defeat to the Texans on Friday.

The defending Super Bowl champions will play Cincinnati in a rematch of the title game at 4 p.m. Saturday.

Gentry recorded no stats in Buffalo’s win over Denver on Saturday.

A favorite target in college of Josh Allen, Gentry has been with the Bills since 2020 following a brief stint with the XFL’s New York Guardians, who folded after the league suspended operations due to impacts from the COVID-19 pandemic.

Bobenmoyer is still the only long snapper listed on Denver’s depth chart, appearing to be the Broncos’ long-term option in the position even after the team held tryouts for several different long snappers earlier in the offseason.

The former Thunderbird supplied footballs for Denver kicker Brandon McManus (who went 3 for 3 on field goals) and punter Corliss Waitman in the Broncos’ defeat to the Bills on Saturday.

Nimmo has recorded a hit in nine of his past 11 games for the Mets, who currently lead the National League East with a 79–46 overall record as they look poised to make a playoff appearance later this year.

Currently, the former Thunderbird (and Wyoming’s only current professional baseball player) is batting at a .264 average for the year with 11 home runs and 42 RBI. He is additionally second on the team, behind second baseman Jeff McNeil, in doubles with 24.