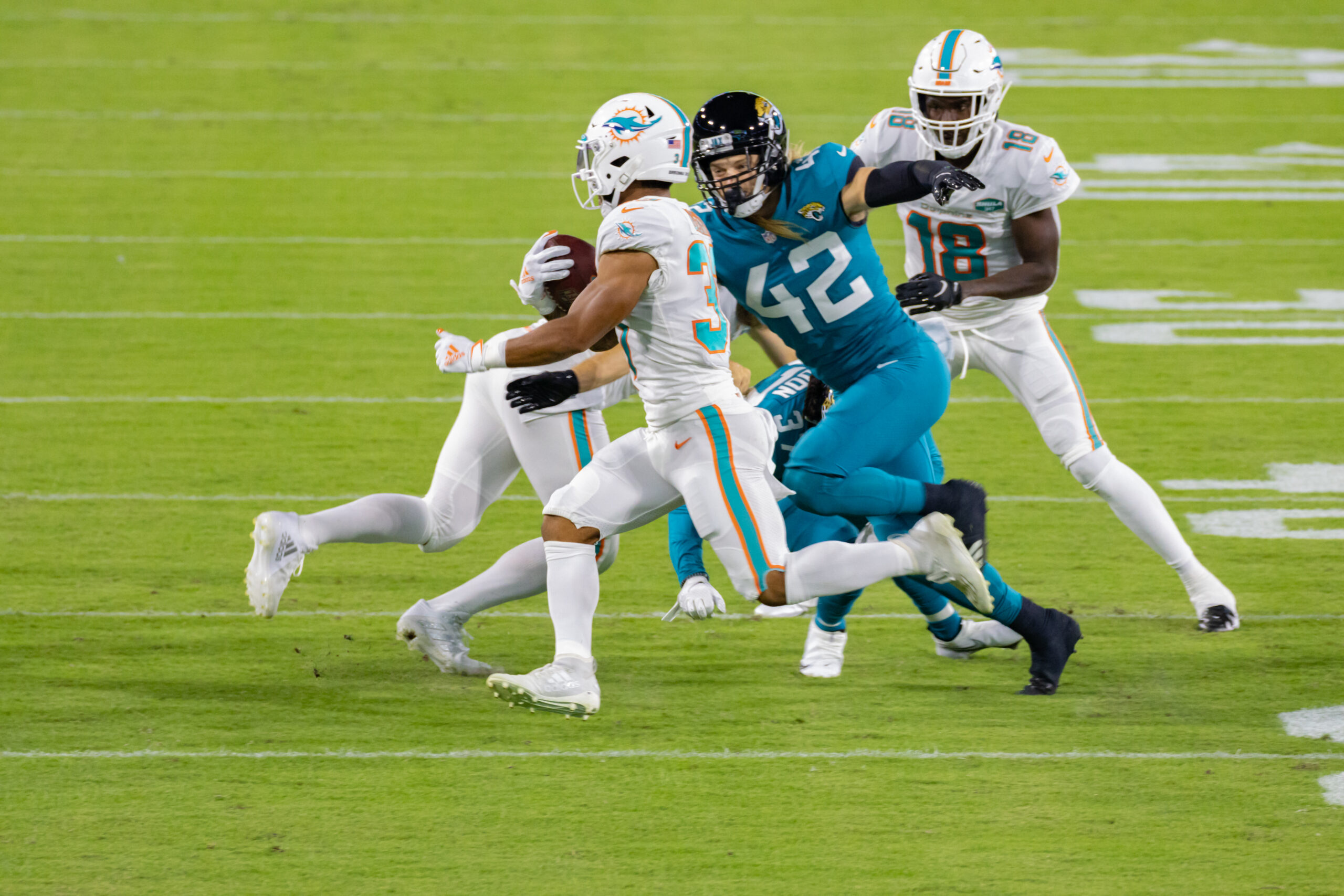 Former Wyoming and current Jacksonville Jaguars safety Andrew Wingard lunges for a tackle in a game against the Miami Dolphins. (Shutterstock)

NOTE: The following players listed went to the University of Wyoming at some point in their college careers, played high school sports in the state, or both. For the NFL, only players currently on or recently a part of active rosters are listed.

Unsurprisingly, the superstar signal-caller didn’t play in Buffalo’s preseason finale, a 21–0 loss to the Carolina Panthers. As one of the league’s biggest (and therefore most protected) stars, Bills coach Sean McDermott was not going to put Allen — likely the biggest piece of one of the NFL’s top offenses — out on the field in an inconsequential game and at risk for an injury.

Veteran quarterback Case Keenum is officially listed on Buffalo’s depth chart as Allen’s backup, but third-stringer Matt Barkley looked solid in his stint against the Panthers, going 9-for-13 passing for 100 yards. Still, neither player is likely to see the field much in the regular season unless Allen is ruled out with an injury or the Bills are up big in a blowout and want to rest starters.

Buffalo will take part in the first game of the 2022 NFL regular season against the defending Super Bowl champions, the Los Angeles Rams, at 6:20 p.m. Sept. 8 on NBC.

The Casper native was rested in Cincinnati’s 16–7 preseason finale defeat to the Rams in a Super Bowl rematch to ensure he’s back to full health this regular season from offseason shoulder surgery.

Expected to be a key part of a solid Bengals defense following a strong 100-tackle, four-interception season a year ago despite playing in just 13 games, Wilson has serious potential to be the first Wyoming-born Pro Bowler since the Casper-born Zane Beadles did it for the Denver Broncos in 2012.

The Bengals open up their regular-season schedule against an AFC North rival, the Pittsburgh Steelers, at 11 a.m. Sept. 11.

Muma didn’t play in Jacksonville’s preseason finale against the Atlanta Falcons and easily made the Jaguars’ 53-man roster after the team’s final cuts were announced Tuesday afternoon.

A two-time first-team All-Mountain West selection and a third-team Associated Press All-American his senior year, Muma, who was picked by Jacksonville in the third round of this year’s NFL Draft, will look to follow in Wilson’s footsteps as a pair of former UW linebackers making waves on NFL defenses.

The Jaguars open up their season against the Washington Commanders at 11 a.m. Sept. 11.

Epps didn’t see the field in the Eagles’ preseason finale — a 48–10 blowout at the hands of the Miami Dolphins — but the former Cowboy earned the top spot on the depth chart at strong safety due to some impressive performances he put on and rave reviews he garnered throughout training camp and the preseason.

Being part of a talented secondary that features former Pro Bowl cornerback Darius Slay, Epps could be poised for a big year in an upgraded role following a career-high 62 total tackles a season ago.

Set to be Washington’s starting center on an offensive line tasked with protecting new quarterback Carson Wentz, Roullier, who will return for his first regular-season games following a fractured fibula he suffered last season, will be looking for a bounce-back campaign on a team that will attempt to compete in the NFC East.

The Commanders kick off their season against the Jaguars — in which Rouiller will run into former UW teammates Andrew Wingard and Chad Muma — at 11 a.m. Sept. 11.

Gipson’s tenure with the 49ers didn’t last long. About a week after signing a one-year deal with San Francisco as Jimmie Ward’s status of free safety was up in the air, the 49ers released the 32-year-old former Poke when the team made final roster cuts Tuesday.

The Texan will now look for another opportunity on what could be his sixth different NFL team in a productive career that’s included 27 career interceptions and a Pro Bowl appearance in 2014 with the Cleveland Browns.

Wingard made Jacksonville’s final cut on its roster to 53 players and is currently listed as the second strong safety on the team’s depth chart behind Rayshawn Jenkins. The Coloradan did not see the field in the Jaguars’ preseason finale defeat to the Falcons.

The Jaguars open up their season against the Washington Commanders at 11 a.m. Sept. 11.

Granderson, who signed a two-year contract extension with the Saints in March, made the 53-man roster out of the preseason and did not play in New Orleans’ preseason finale, a 27–10 win over the Los Angeles Chargers.

A former first-round draft pick of Jacksonville who became a free agent this offseason after the team declined his fifth-year option, Bryan — who played college football at Florida as one of the most talented recruits in Wyoming high school football’s recent history — has appeared to excel thus far in Cleveland.

Not only did the former Mustang make the Browns’ 53-man roster, but the team’s current depth chart lists Bryan as a starter on a loaded Cleveland defensive line featuring a pair of former All-Pros, Myles Garrett and Jadeveon Clowney. Bryan recorded three total tackles in Cleveland’s preseason finale, a 21–20 loss to the Chicago Bears.

The Browns open up their season against the Panthers at 11 a.m. Sept. 11.

Gafford did not make the Packers’ 53-man final roster, but could see time on the team’s practice squad for his versatility, Sports Illustrated reports.

A former wide receiver at the pro level that’s been converted back to his college position of cornerback, Gafford often returned kicks for Green Bay this preseason and could be of use for the team as they try to simulate opposing players in practice throughout the regular season.

Purcell was released Tuesday after he did not make Denver’s final roster cuts. The 31-year-old nose tackle had a four-year tenure with the Broncos, going through a late career resurgence after numerous stints on practice squads and even a brief time with the Salt Lake Stallions of the now-defunct Alliance of American Football.

He did not appear on the field in what came to be his final game in Denver with the team’s preseason finale, a 23–13 win over the Minnesota Vikings.

Hollister was on the 53-man roster bubble heading into Tuesday’s cuts, but made the team just narrowly and was immediately put onto the reserve/injured list following a series of practices missed, The Athletic reported. He did not play in the Raiders’ preseason finale, a 23–6 win over the New England Patriots.

Vegas starts its season with a game against a division rival, the Chargers, at 2:25 p.m. Sept. 11.

Hall was cut from the Rams’ 53-man roster Tuesday. The 23-year-old had been with the Rams’ practice squad throughout all of last season, earning a Super Bowl ring in the process because of it.

Hall will be looking for his third NFL team after he was signed as an undrafted free agent by the Falcons in 2020.

It was a rough week for one of Josh Allen’s favorite collegiate targets. Gentry caught one ball for five yards in the Bills’ preseason finale against the Panthers before suffering a leg injury in the second quarter, ruling him out for the rest of the game.

To add onto the misery, Gentry was a victim of Buffalo’s final cuts Tuesday, and though it’s possible that he could see a spot on the Bills’ practice squad as he has the past two seasons, the severity of his injury could limit his field time for the foreseeable future.

The former Thunderbird was officially penciled in as the Broncos’ long snapper for 2022 after he made the 53-man roster cut and was listed as Denver’s starter in the position for the third consecutive season.

Bobenmoyer will have a slight adjustment to deal with this time around, however. Belgium-born punter Corliss Waitman beat out returning starter Sam Martin for punting duties, meaning that Bobenmoyer will have a new player at the position to establish rapport with as the regular season progresses. Returner Brandon McManus remains Denver’s kicker.

The Broncos begin their season against the Seattle Seahawks at 6:15 p.m. Sept. 12.

Nimmo started all four of the Mets’ games this past week as New York pulled off wins in three of them and strengthened its hold at the top of the National League East standings, where it leads the Atlanta Braves by three games as of Aug. 30.

The former Thunderbirds’ two-hit, two-RBI day was particularly critical in the Mets’ 3–0 win Saturday over the Colorado Rockies, Nimmo’s 10th multi-RBI game of the year thus far. Currently Wyoming’s only MLB player, Nimmo is hitting .263 with 44 RBI to his name this season.