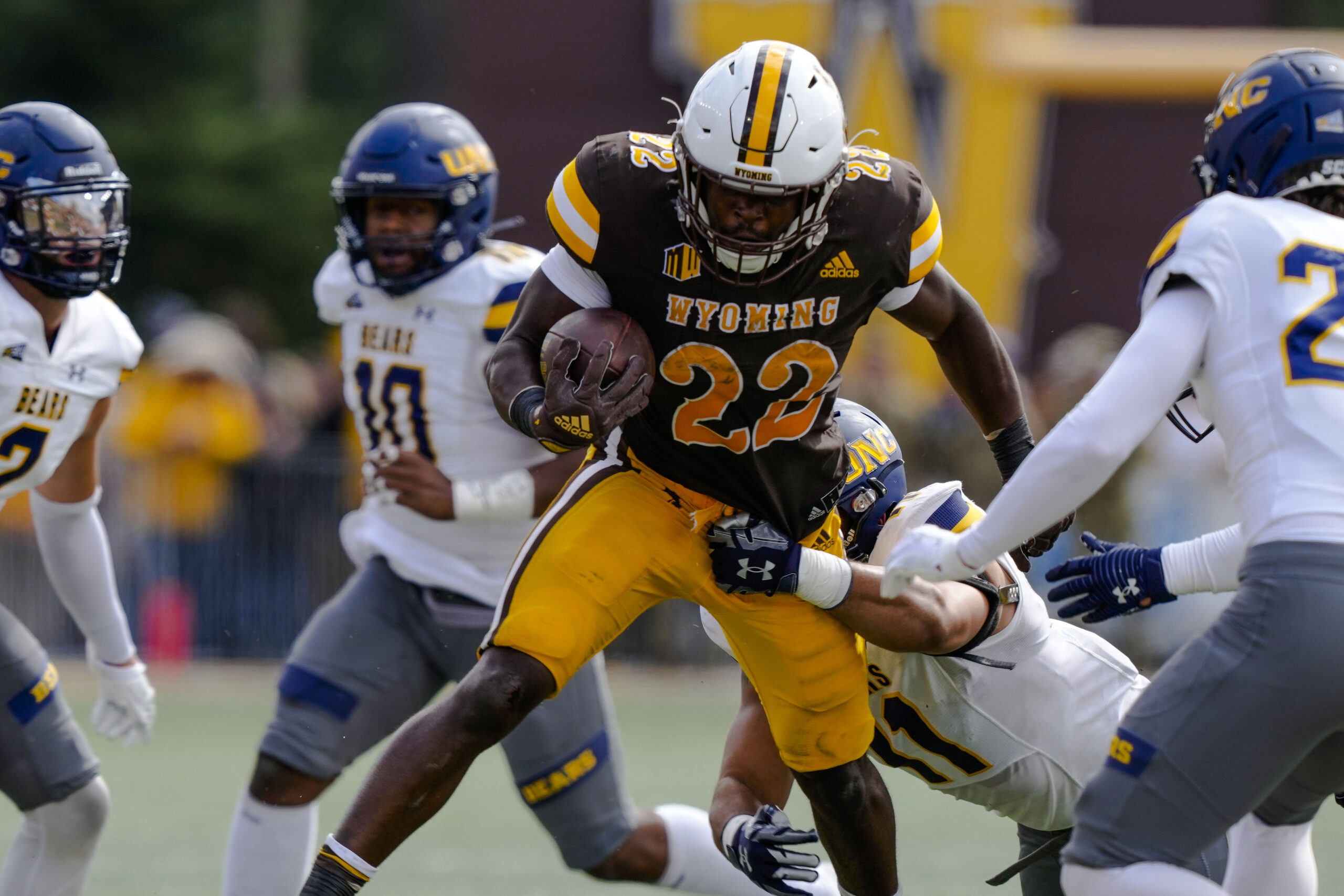 NOTE: The following is courtesy of University of Wyoming Athletics.

Wyoming was fueled by three turnovers from its defense that also held Northern Colorado to 147 yards of total offense, including only 15 rushing yards. The Wyoming special teams were led by kicker John Hoyland, who made four field goals for the second consecutive week to tie a career high, and the Cowboy offense featured an extremely balanced attack, rushing for 149 yards and passing for 144 for a total of 293 yards of total offense.

Wyoming’s outstanding defense was led by linebacker Easton Gibbs, who totaled nine tackles, two tackles for loss, a sack and two quarterback hurries. His running mate at linebacker, Shae Suiaunoa, tallied a career-high eight tackles, one sack, one tackle for loss, one quarterback hurry and the first interception of his career.

Omotosho is the first Cowboy to record three sacks in a single game since former Cowboy linebacker and current Jacksonville Jaguar Chad Muma had three sacks against UNLV in 2020. Cornerback Cam Stone intercepted the first pass of his career to go with a pass breakup and one quarterback hurry.

On offense, junior running back Titus Swen rushed for 76 yards on 15 carries and scored a career-high three rushing touchdowns. He was joined by running backs Dawaiian McNeely with 48 rushing yards and Joey Braasch with 38.

Cowboy quarterback Andrew Peasley completed 63.3% of his passes (19 of 30) for his second straight game, completing over 60% of his pass attempts. Peasley threw for 144 yards and once again spread the ball around to eight different receivers.

One of those receivers, Wyatt Wieland, caught a career-high five passes for a career-best 53 yards. Wide receiver Joshua Cobbs and fullback/tight end Parker Christensen each added five catches for 44 and 31 yards, respectively.

On special teams, Hoyland was not only a perfect 4 for 4 on field goals on the day, but he also was a perfect 3 for 3 in point-afters and scored a total of 15 of Wyoming’s 33 points. Cowboy punter Clayton Stewart averaged 48.5 yards per punt on four punts.

“This game didn’t turn out the way I thought it would, but I was glad we got some separation at the end,” said Wyoming head coach Craig Bohl at his postgame press conference. “There were some really good things we did. I thought our defensive guys did really well. We got good pressure on the quarterback.

“There was some resolve [among our guys], and there’s things to improve. John Hoyland continues to be money, and we are excited about that.

“I’m glad we were able to pull away in the end. What you have [against an FCS opponent] is an opportunity for [their] players to show they belong on a different stage. You’re going to get max effort, and we told our guys that. We anticipated that today and certainly got that [from Northern Colorado].

I know they talk about having a prolific passing game [at UNC], which I think they do, but we were able to make them one dimensional. If you can shut the run down, then you have so many more tools in your toolbox. That was going to be critical for us. They were constantly behind the sticks and then our defensive linemen were able to pin their ears back and get some pressure. I don’t know how many times we hit the quarterback, but it was countless times.”

The Cowboy defense ended the game with five quarterback sacks and 10 quarterback hurries.

Wyoming controlled the first half against the Bears, limiting UNC to only 68 total yards on 25 plays, while the Cowboy offense used a balanced attack totaling 69 rushing yards and 64 passing for 133 total yards on 41 total plays.

The Bears’ deepest penetration of the half was the Wyoming 38-yard line on their first possession of the game. It would be the only time they would cross the 50-yard line in the first half.

The Cowboys generated three first-half scoring drives, each ending with a field goal. Hoyland converted field goals from 23, 41 and 39 yards to give the Pokes a 9–0 halftime lead. The first Wyoming scoring drive came on its first possession of the game and covered 56 yards over 11 plays, with Hoyland making a 23-yard field goal with 4:27 remaining in the first quarter.

Wyoming also scored on its second possession of the game. With 13:42 remaining in the second quarter, Hoyland connected from 41 yards out to cap off an 11-play drive for 27 yards to extend UW’s lead to 6–0.

In the second quarter, Stone intercepted UNC quarterback Dylan McCaffrey at the Bear 47-yard line. Wyoming proceeded to drive 25 yards over nine plays, resulting in a 39-yard field goal by Hoyland with 5:08 remaining in the half. Wyoming would take that 9–0 lead into halftime.

The second half began with Wyoming going three-and-out on their first series. After UNC gained a first down on its first series of the second half, it appeared the Cowboy defense had held forcing a fourth down and six at the Northern Colorado 44. But out of punt formation, Bear tight end Kurt Gallup took the snap and ran nine yards for a first down to the Wyoming 47. UNC would move the ball down to the Wyoming 15-yard line, where the Bears faced a fourth and seven. Place-kicker Hunter Green entered the game and kicked a 32-yard field goal to cut Wyoming’s lead to 9–3.

The Cowboys responded immediately as Peasley connected with Cobbs for 15 yards and Wieland for 26 yards on the drive. Swen finished off the drive with a six-yard touchdown run for Wyoming’s first rushing touchdown of the season to extend Wyoming’s lead to 16–3.

Neither team was able to move the ball on their next possessions. Wyoming punter Stewart, who enjoyed an outstanding day averaging 48.5 yards per punt on four punts, unfortunately bobbled the snap on the Cowboys’ punt attempt.

Stewart was forced to try and run away from the rushing Bears, but was tackled at the Wyoming nine-yard line. UNC would capitalize five plays later, when wide receiver Trevis Graham took the ball on a fake sweep and then threw back to quarterback Jacob Sirmon for a six-yard TD to pull the Bears to within six points at 16–10 with 14:48 remaining in the fourth quarter. That was as close as Northern Colorado would get.

Wyoming’s offense would respond with a nine-play, 32-yard drive midway through the fourth quarter that featured a spectacular one-handed, 17-yard catch down the sideline by Cobbs, who got one foot down inbounds. After an official review, the catch was confirmed and Wyoming had a first and goal at the UNC nine-yard line.

The Pokes attempted one run for zero yards followed by an incomplete pass, and then Peasley was sacked for nine yards. Hoyland came in and knocked through his fourth field goal of the day, this one from 35 yards, and Wyoming built a nine-point lead at 19–10.

The Cowboy defense then closed out the game in spectacular fashion. On a fourth and 10 from its own 35-yard line with about four minutes remaining in the game, UNC quarterback Sirmon was sacked by Omotosho for 13 yards. Omotosho knocked the ball loose, but Northern Colorado recovered the fumble; however, the ball went back to Wyoming on downs. On the first play from scrimmage, Swen broke through on the left side and took the ball into the end zone from 22 yards out to stretch the lead to 26–10.

Northern Colorado’s next offensive series ended with an interception by Suiaunoa on the UNC 21-yard line. He returned it 18 yards down to the three. Swen would score his third rushing touchdown of the day from one yard out two plays later and the victory was sealed at 33–10 with only 1:04 left on the clock.

UNC’s final possession resulted in another turnover as Wyoming safety Williams forced a Bear fumble on second down and his running mate at safety, Ekeler, recovered the fumble at the Northern Colorado 29. Cowboy backup quarterback Jayden Clemons came in to take the final two snaps. Clemons kneeled down twice and the Pokes had secured their second straight home win of the season.

Next Up:
It will be a short week for Wyoming this coming week as they will open up Mountain West Conference play hosting Air Force for a special Friday night game Sept. 16. The game is scheduled to kick off at 6 p.m. from War Memorial Stadium in Laramie.